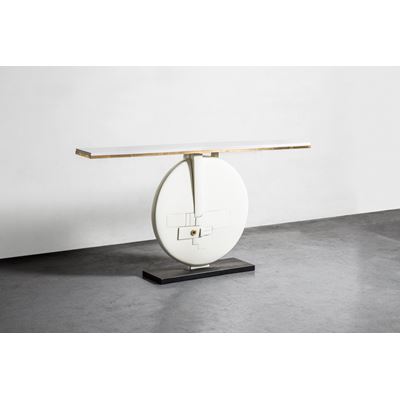 For BRAFA 2023, Galerie Forest Divonne will show masterpieces in painting by Jeff Kowatch (America 1965), in sculpture by Christian Renonciat (France 1947) and for the first time, futuristic furniture by François Cante-Pacos (France 1946). Jeff Kowatch is a Californian painter born in 1965. Long represented in New York and Los Angeles by the mythical dealer Earl McGrath, alongside Brice Marden or Bruce Nauman, he is now established in Belgium where his work is highly sought after. Christian Renonciat, a French artist born in 1947, is a virtuoso of wood, which he brings to the limit of trompe l’oeil in spectacular bas-reliefs. François Cante-Pacos, French artist and designer, born in 1946, is the creator of the Pierre Cardin logo and furniture in the 1970s... Illustration: François Cante-Pacos' furniture Galerie La Forest Divonne is a contemporary art gallery founded in Paris in 1988 by Marie-Hélène de La Forest Divonne. In 2016 a second space was opened in Brussels by her son, Jean de Malherbe, under a spectacular Art Deco glass-ceiling, behind an iconic Victor Horta building. It is now two generations of gallerists who build an independent line of international artists, whose practices cover all plastic expressions: from historical figures such as Lucien Hervé for photography, Vincent Bioulès or Alexandre Hollan for painting, to mid-career artists such as Jeff Kowatch, Guy de Malherbe and Catherine François. The work of younger artists such as Tinka Pittoors, David Décamp or the photographic duo Elsa & Johanna is also promoted by the gallery. Since 1988, Galerie La Forest Divonne has produced over 300 exhibitions. It has also participated in major art fairs around the world, such as BRAFA, The Biennale des Antiquaires, Art Brussels, Art Paris, Paris Photo or Expo Chicago.