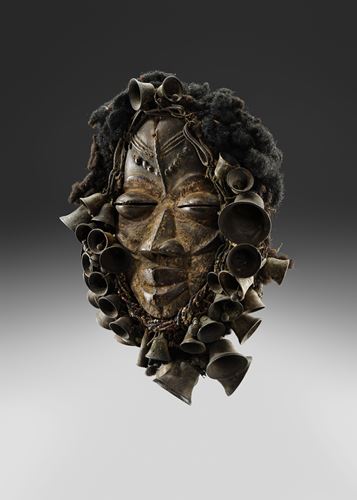 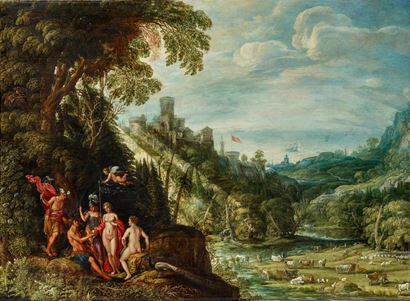 David Teniers the Elder (Antwerp, 1582-1649) The Judgement of Paris Oil on panel laid on plywood 41.8 x 56.5 cm Later annotation lower left ‘PBRIL.F / V.THV.L. / F’ Provenance: private collection, Sweden, listed as by Paulus Bril and Theodor van Thulden; Anonymous sale, Sotheby's, London, 16 December 1999, as lot 11; Anonymous sale, Van Ham Kunstauktionen, Cologne, 30 October 2000, as lot 1844; private collection Literature: E. Duwerger & H. Vlieghe, David Teniers der Ältere. Ein vergessener flämischer Nachfolger Adam Elsheimers. Utrecht: Haentjens Dekker & Gumbert, 1971, pp. 45, 79 and 82, ill. 33 Know at the RKD, The Hague, The Netherlands, under n° 62811, as by David Teniers I. Although examination of the painting under a stereomicroscope showed that the signature must have been applied at the same time or only little later, this is definitely a later addition. Vlieghe does not address the signature in his description and notes that the painting was in a Swedish collection where it was listed as by Paulus Bril and Theodor van Thulden. On the basis of style-critical comparisons to David Tenier the Elder, he attributes it to this artist. There are no collaborative work known by Paulus Bril and Theodor van Thulden and such a collaboration would be especially unlikely since Van Thulden is a generation younger than Bril. The piercing shafts of heavenly light in the resent composition recall the effect in Teniers' The Conversion of Saint Paul, attributed to Teniers by Dr. Margret Klinge, Düsseldorf, who dates that painting to the 1620s. 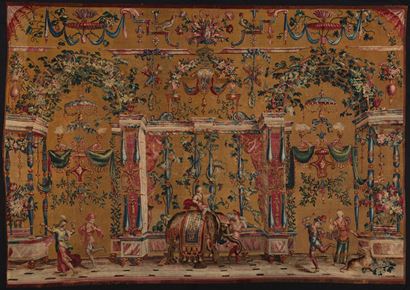 Elephant from the set ‘The Grotesques” Manufacture royale de Beauvais, after Jean-Baptiste Monnoyer and Jean Bérain I, around 1700 Wool and silk 250 x 354 cm 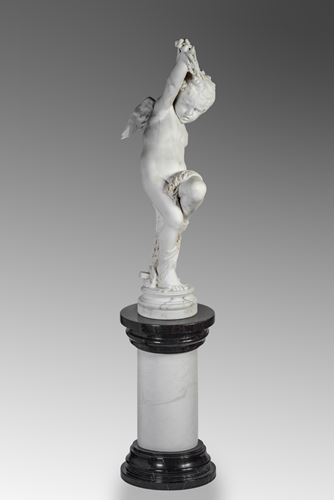 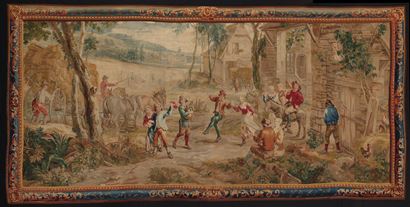 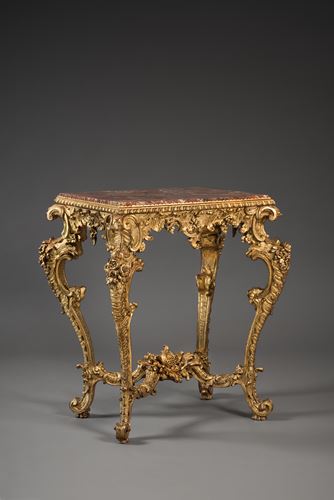 Console Carved and gilded poplar with top marble Royal Palace Workshop, Turin, circa 1755-1760 H 90 x W 84 x D 62 cm Provenance: private collection, Turin, Italy Literature: Vittorio Viale, Mostra del barocco piemontese. Mobili ed intagli, Turin, 1963, tav. 69; Roberto Antonetto, Il mobile piemontese nel Settecento. Vol. II, Turin, 2010, p. 217, n° 22 Exceptional wall console, with four cross legs, streamlined and elegant in shape. The wood has been inlaid with exquisite workmanship and worked with two types of gold, ‘shiny gold leaf’ and ‘dull gold leaf to give a depth and accentuate the richness of the engraving. The extraordinary rococò decoration of Palazzo Reale and Palazzo Carignano is perfectly evident in this console, in particular in the spirals and rippling flowers on the leg tops. Other exceptional features are the leaves under the table and the large flower at the crossover of the legs. The elegant, flowing line of the legs is accompanied by an amazing expressive force and the quality of the inlay; multiple spirals, flowers, leaves, vegetation stylings and a beautifully elegant curl, which bring to mind the best works of the greatest Piedmontese wood engravers like Piffetti, create a unique whole of the best quality. The top of the console is closed by a small Greek fret typical of Louis XV in which the marble is slotted, this too being of exquisite manufacture. 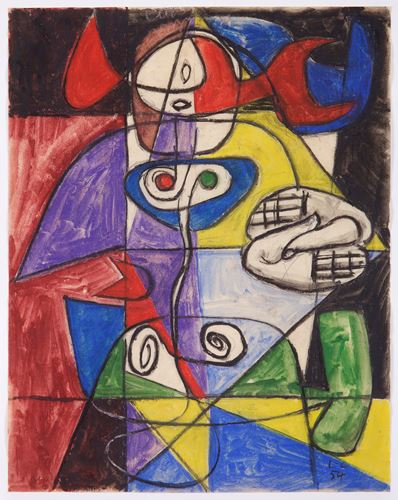 Mvwalla staff handle Ivory Kingdom of Kongo, late 16th-early 17th century H 13.5 cm Provenance: Fernando Moncada, Lisbon and Joshua Dimondstein, Los Angeles collections Literature: M. L. Félix, White Gold, Black Hands, Ivory Sculpture in Congo, V. 2 (p. 156) Important Kingdom of Kongo staff handle portraying a high ranking official or local ruler, in mid-16th century Portuguese attire, an iconography that reinforced its owner’s authority status. Figurative handles were produced in a variety of materials, ivory being the rarest and hence reserved for use by religious, political and social elites. This handle’s symbolic associations relate to leadership authority as well as to ritual attributes charged with mystic beliefs, aspirations and moral principles. This figure fitted onto the top of a leader’s staff (Mvwala), an insignia carried by a Kongo ruler or government official. The Mvwala were essential in the perpetuating of memories passed down generations, as well as tools to communicate with subjects or to mediate between the worlds of the living and the dead. 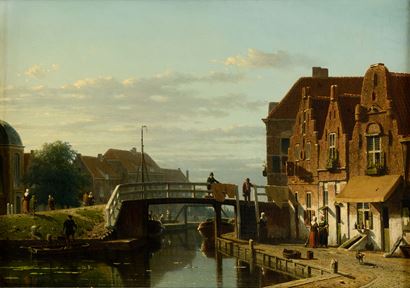 Jan Weissenbruch (The Hague, 1822-1880) View of Leidschendam, circa 1856 Oil on canvas 56 x 80 cm Signed lower left: JAN WEISSENBRUCH f Provenance: (possibly) with Goupil & Cie, The Hague by 1862 (as Leydshendam); (possibly) acquired from the above by M. le Marquis d'Harcourt; the British sculptor Sir George Frampton RA (1860-1928), St John's Wood, by 1922; thence by descent Exhibitions: almost certainly at Brussels Salon, 1857, n° 1235 (as Vue prise de Leidschendam); Teylers Museum, Haarlem, 10 September 2016-8 January 2017 Literature: Teylers Museum (ed), Jan Weissenbruch, exh.cat., Bussum 2016, p. 151, n° 119 (repr); Willem Laanstra, Jan Weissenbruch. Schilder-graficus: 1822-1880, Amsterdam 1986, p. 65 (for the preliminary oil study) and p. 30 (for the preliminary drawing); Kunstkronijk, 1857, p. 94 (for a lithograph based on our painting) The Dutchman Jan Weissenbruch (1822-1880) counts as one of Holland’s most original 19th century painters of townscapes. Standing in his country’s long tradition of this genre, with illustrious 17th century predecessors like Pieter Saenredam, Gerrit Berckheyde and Jan van der Heyden as leading examples, Weissenbruch established a niche for himself through an almost uncanny mastery of contrast that managed to suffuse his paintings with an adroit stillness and an extraordinary suggestion of sunlight that is essentially unrivalled in Dutch 19th century art. Our painting, a view of the small town of Leidschendam, near The Hague, is an excellent example of that. The spot chosen by Weissenbruch is the Delftsekade canal, with the bulbous dome of the reformed church showing on the left. By keeping the horizon low and the buildings in the painting relatively prominent, allowing for light contrasts to be portrayed as accurately as possible, the artist provides an almost perfect illusion of a sun-dappled day. An observation up-close reveals the lightest of touches, with almost no visible trace of paint. The very thinness of the veneer adds to the perception of an almost weightless blue sky. The left side of the canvas is relatively shady and subdued, which allows the yellowish light of the sun to illuminate the lower right of the composition, thereby creating an almost tangible sense of early summer warmth. This is vintage Weissenbruch: although there are people in our painting, going about their business, they are arranged as miniature dolls in a scene intended to convey an almost otherworldly sense of harmony. In doing this, the artist departed from the style of so many of many of his colleagues, like Springer and Van Hove, whose townscapes were intended to be much more “ordinary” depictions of actual street scenes, with much wider vistas and clear reference to human activity. Weissenbruch was born in The Hague in 1822. He enrolled at the local drawing academy at the early age of 14, where he stayed until 1840. He studied under the aegis of artists like Antonie Waldorp and Samuel Verveer. His natural aptitude as a draughtsman led to his participating in exhibitions both at home and abroad from 1839 onwards; throughout his career he was to continue participating in salons in Brussels, London and Paris. Indeed, it was at the Brussels Salon of 1860 that two of his works were bought by Prince Albert as a present for Queen Victoria. These works still today form part of the collection of HM Queen Elizabeth II. Towards the end of his life, Weissenbruch developed agoraphobia, which inevitably greatly restricted his working routine. Despite this affliction, however, he continued painting until his death in 1880. Weissenbruch was a very methodical artist. He travelled throughout Holland in order to make drawings of quiet spots near rivers and in towns. His paintings would normally be preceded by little sketches he made whilst in situ, although he would also occasionally base a painting on an etching he had done earlier. Before producing a finished painting, he would often produce a study in oils, which he would also sign and sell. Unlike work that he made in the earlier part of his career, Weissenbruch seldom dated any of his later paintings. This means that a chronology of his oeuvre after about 1850 is very difficult to establish. Nevertheless, given the remarkable similarity between our painting and the (mirror image) lithograph that Weissenbruch submitted to the Dutch periodical Kunstkronijk for publication in 1857, it is almost certain that the present painting was the finished product blessed by the artist for exhibition at that year’s Brussels Salon. The study that exists of our painting clearly shows the experimental stage of the artist’s train of thought, with the buildings being further apart, so that the effect of sunlight on houses was less explicitly brought into focus. In our painting, the vista is foreshortened in order to be able to contrast the effects of light more forcefully. In addition, Weissenbruch has added certain embellishments to our painting to make the scene more lively and to distinguish it from the sparser composition of the study. All leading Dutch museums today own work by Weissenbruch. His work can also be seen in international museums in, for example, Belgium, the Kunsthalle Hamburg and the Hermitage in St Petersburg. Recently, a retrospective at the Teylers Museum in Haarlem provided an overview of Weissenbruch’s impressive oeuvre, allowing a new generation of museum visitors to enjoy the beauty of this exceptional artist’s work. 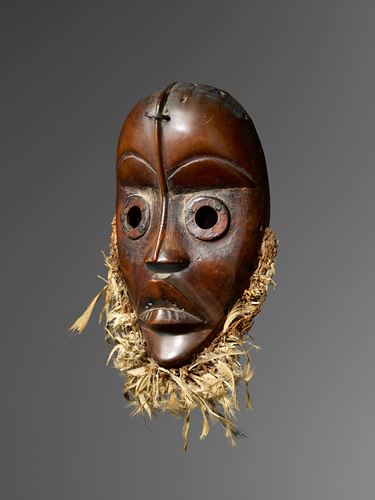 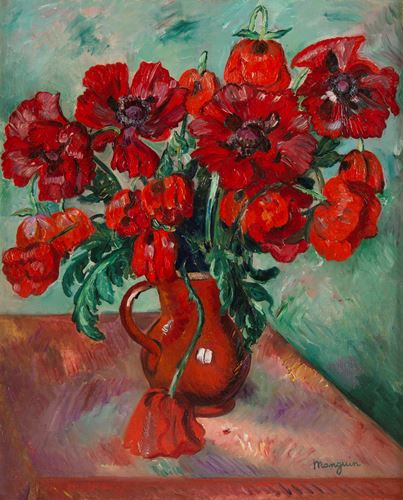 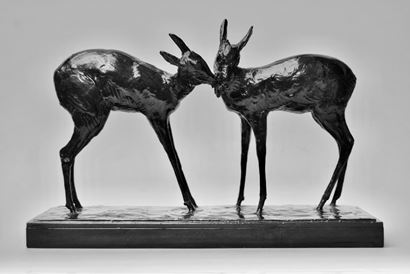 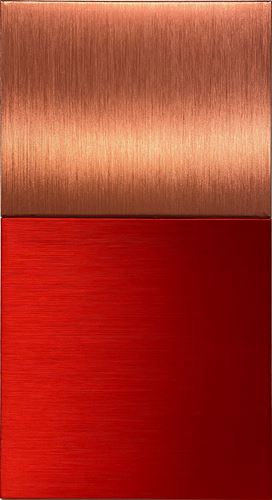 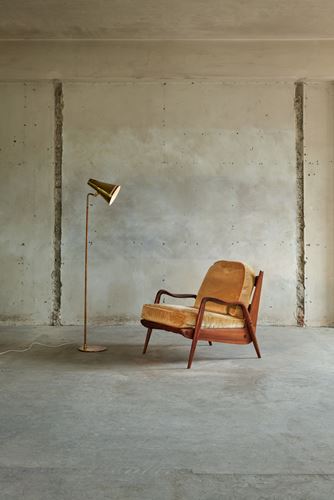 Phillip Lloyd Powell (USA, 1919-2008) 'New Hope' lounge chair American walnut and velvet upholstery United States, 1960s H 75 x W 73.5 x D 80 cm (seat H 42 cm) The name 'New Hope' is a reference to the place where Powell opened his workshop in 1953. Phillip Lloyd Powell (1919-2008) was an American self-taught designer who designed natural, sinuous and textural furniture. All of his pieces are handmade from high quality, grained woods that often recall there natural shape and form. Another natural material that he often used was slate, the deep grey material was used for table or credenza tops. Lloyd Powell created about a thousand pieces in his lifetime because he wanted to produce only exquisite pieces. In comparison to his contemporary George Nakashima, who produced about 10.000 pieces. 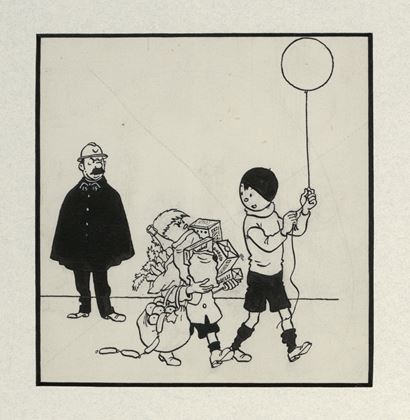 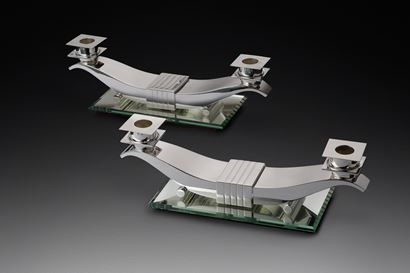 Pair of candelabra Paris, circa 1930 Silver and mirror H 7 x W 31.5 cm - Mirror: L 21 x W 11.5 cm Maison Eschwege founded in 1897 These candelabra will be in the future catalogue raisonné of the Maison Eschwege 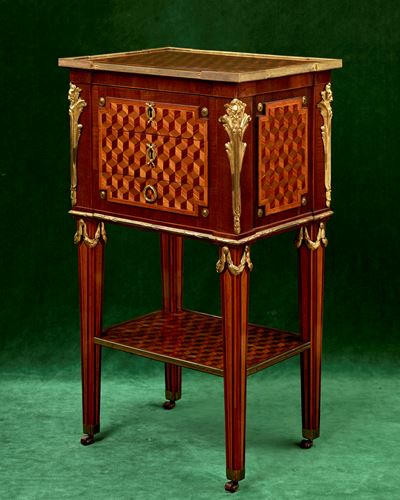 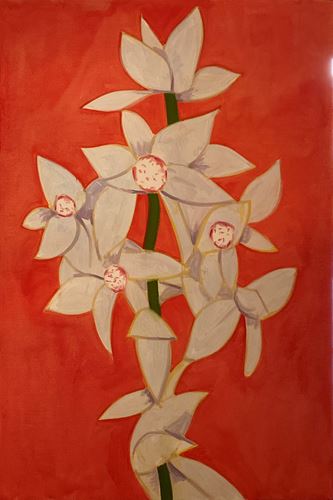 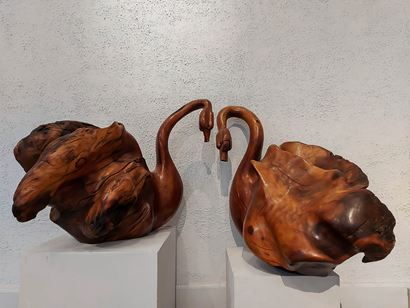 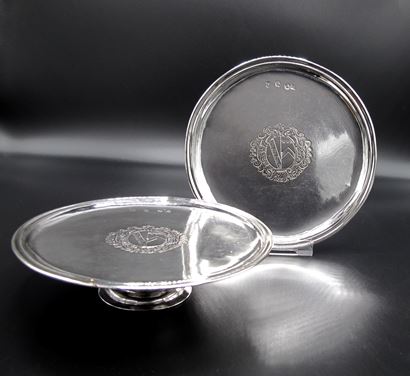 Pair of Queen Anne tazzas by William Truss Silver London, 1713 H 4 cm Ø 15.8 cm Circular with a raised molded rim on circular pedestal foot, the field engraved with a contemporary coat-of-arms within a decorative cartouche, marked on the fields.