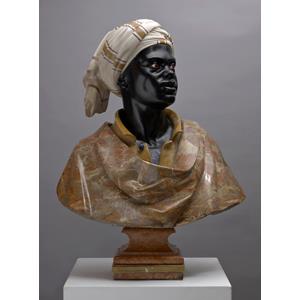 A pair of bust of Blackamoors
Polychrome marble, 64 cm high each
Venice, 1820 circa

The pair of busts is an extremely refined example of Venetian taste at the beginning of the 19th century.
The fascination with the representation of Africans runs through centuries of European art, and if we focus on sculpture we notice that this theme had a particular success in Venice, for example with Melchior Barthel in 17th century.
In these two busts the bodies of the Africans are carved in Belgian black marble. A type of breccia is used by the sculptor for the drapery of the man and for the veil of the woman, and there is a significant use of lapislazzuli (which was expensive) especially on the female figure, which is adorned by a removable necklace.
Such busts were used as decoration for the main rooms of palaces. They were produced also in wood, especially ebony, but those made of marble, for their inherent cost and for the workmanship required, were only for the wealthiest families.
It is not unusual to find such marble busts still today in Venice’s main museums and in many of the villas of the aristocracy in the Veneto.