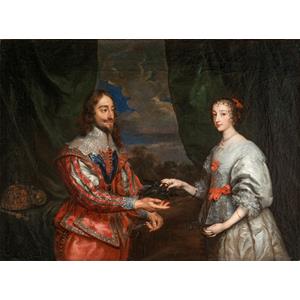 The original work (now in the Archiepiscopal Castle, Kromeriz, Czech Republic), made by Anthony Van Dyck, was ordered by Charles I as a gift for his wife in 1632. The painting was to be set ‘above the Chimney in the Wth Drawing room’ in Sommerset House.

The composition was an immediate success and copied several times by notorious painters as Hoskins (for the king) and Gibson (see S. Barnes, Van Dyck, A complete catalogue of the paintings, Yale University Press, 2002, pp. 461-462). Another copy -in miniature and only from the Queens head- was orderded by Charles I, is now in the Rijksmuseum in Amsterdam (also dated 1632). Gonzales Coques must have made several versions derived from the original as well, another similar and also reduced version in the Victoria and Albert Museum (n° 1342-1869). The olive branch held in her left hand may refer to Charles’ peace-loving father James I.