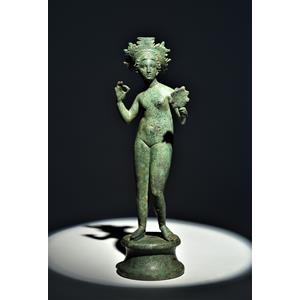 A very attractive statuette of the nude goddess Venus. The centrally parted long wavy hair tied in a chignon at the nape of her neck, surmounted by a diadem with five palmettes with incised decoration. An Isis crown probably once crowned the diadem. In her left hand a mirror, decorated with seven star-like prongs. Forefinger and thumb of her open right hand forming a circle, originally holding an unknown object.