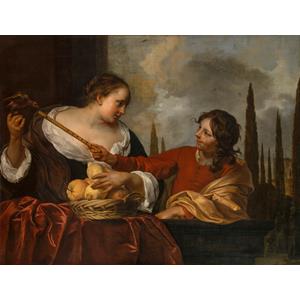 Jacob Van Loo was a Dutch painter, born in Sluis (Zeeuws Vlaanderen) but chiefly active in Amsterdam, where he build up a great career. He became famous for historical paintings with biblical and mythological scenes and was deeply inspired by painters such as Jacob Backer, Gabriel Metsu and Bartholomeus Van der Helst.
He was especially celebrated for the quality of his nudes and works with a sexual connotation. In addition with concerts on balconies and terraces.

In 1660, van Loo fled from Amsterdam to Paris because he was sentenced to death in absentia after a fight in a tavern. He settled there and in 1663, he was admitted to the 'Académie de peinture et de sculpture'. He died in Paris in 1670.
The presented work can be dated (based on stylistic grounds) around 1650 and is emblematic for Van Loo's oeuvre: The parrot, the flute, the younger boy and the woman holding a basket with 'fresh fruits' are all sexually connotated.