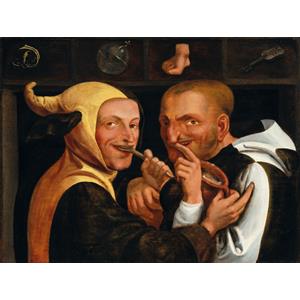 The presented panel is a rare example of a moralising and humorous painting at the same time, commonly depicted in the circles of the ‘Rederijkers’ and the late 16th century intellectual elite. Inventories of this period show that pictures such as these were also hung in the dining rooms of the wealthy bourgeoisie in Mechelen and Antwerp, as a conversation piece: to erudite and delight the informed viewer.

The iconography of the 5 senses is obvious and clearly recognizable: the dog-eared fool tasting from a spoon, touching the other fool with the index-finger and the other fool pointing at his nose, both of them are looking the spectator in the eyes. The symbols on the lintel above the two fools or ‘zotten’ (in Dutch) denote a pictorial rebus, a hidden message so to say. The gilded letter ‘D’ stands for 'De' (Dutch) or ‘the’ (English), whilst the crystal orb, usually seen in the hand of the Salvator Mundi represents the world (or wereld in Dutch). The 'voedt', or foot, is a Dutch word with double meaning, namely ‘feet’ but also 'feed'. And last, the stringed fiddle, is referring to a 'velle', a word which also means 'many' or 'a lot', while the fools in their typical costume below complete the phrase 'De wereld voedt vele zotten', or ‘The world feeds many fools'.