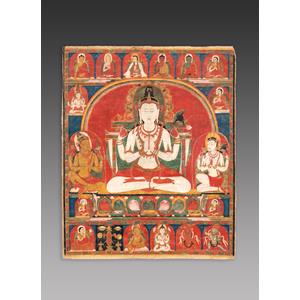 This painting of Avalokiteshvara, Bodhisattva of Compassion, portrays the aspect which is the emblem of the famous prayer in six syllables, the mantra Om Ma Ni Pad me Hum, (om the jewel in the lotus hum). Surrounded by his two principal attendants who kneel reverently beside him, the white Avalokiteshvara has one head and four arms: his central hands are joined in the mudra of homage, his upper right hand clasps prayer beads and the upper left hand holds the stem of a lotus. Avalokiteshvara is seated on a lotus cushion positioned at the base of a simple throne. Below his throne protective deities and wealth deities accompany a monk performing a ritual. In the upper register, the Buddha Shakyamuni is accompanied by monks and translators as well as two additional Buddha, the red Amitabha, Buddha of long Life and the green Buddha of Healing, his alms bowl on his lap. Comparison with paintings dated by inscription allows the attribution to ca. 1250. On the reverse the inscriptions of prayers in Tibetan and Sanskrit language is written in the shape of a triangle.