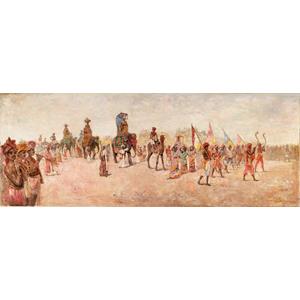 Filippo Mola painted this rare and fascinating painting with its colourful, exotic feel from life probably in Rome. This panel successfully and indeed forcefully convey the choral, collective dimension of the native procession that he witnessed and which was probably held in Rome near the Piazza del Popolo during 1900. The painting was undoutedly prompted by the atmospherics and the memories of this procession.

The grandson of Marquis Filippo Mola, whose name he was given in honour of a family tradition, Filippo came from a family of Roman origin despite being born in Civitavecchio. His father, Cavalier Giacomo Mola, maintained his legal residence at no. 56, Piazza di Spagna in Rome even when he was obliged to move, with his large family in tow, on being appointed Inspector 1st Class of State Property in Bologna. Filippo was put to school with the Barnabite Fathers in that city but he also attended evening class at the Municipal School of Drawing, revealing an unmistakable talent for art at the age of only ten.

He enthusiastically espoused the ideals of the struggle for Italy's unification, but being too young to pursue a military career, he enrolled at the Military Academy in Turin in 1866, while simultaneously studying at the University where he signed up for Architecture, and at the Academy of Fine Arts in Bologna where he won first prize in the Higher Decoration Course.

By 1871 he was a military engineer at Casale Monferrato, where he surveyed the fortifications and devoted his energies to military architecture, but before the year was out he was transferred to the Ministry of War in Rome with the rank of Corporal in the telegraph service. He was telegraph officer with the Ministry of Agriculture, Industry and Trade from 1874 to 1878.

Rome, which had just been reunited with Italy and was its capital in all but name, offered the young twenty-year-old his major break, allowing him to attend the Accademia di San Luca where he immediately made a name for himself, winning his first prizes for decoration and architecture and his school teacher's certificate.

Thus by the age of twenty-four Mola was already splitting his time between teaching and painting, and in 1876 he became a member of the International Artists' Association of Rome. He showed his work successfully at a number of exhibitions from 1880 to 1890, winning prizes and earning excellent reviews in the press. Some of his publications, printed for teaching purposes, were adopted in various government and foreign schools, winning prizes and the personal commendation of the then Minister of Public Education P. Borselli.

But while his professional and artistic careers flourished, the same could not be said of his private life. His daughter Beatrice died young in 1885 and three years later he was legally separated from his wife, Adele Acconci Saladini, who herself was only to survive their daughter by a few years.

In 1890 Mola once again attracted unanimous applause from public and critics alike at the First Exhibition of the City of Rome. On returning from his trip to South America, he resumed teaching, while in his capacity as a painter he showed his work at numerous exibitions in Rome, Milan, Leghorn and Foggia, invariably winning prizes and praise from the press.

Still enterprising and energetic in his mature years, Mola travelled up and down the Italian peninsula on several occasions, recording landscapes, events and traditions with his pencil or with his brushes and palette.

Death caught up with him while he was away from home. While visiting his nephews in Brescia, he came down with the Spanish flu and died there on 4 August 1918.