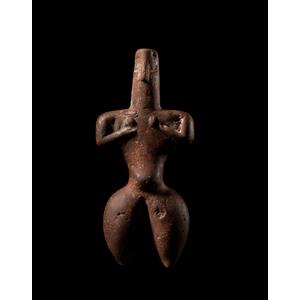 Often given the name ‘Venus idols’, Neolithic statuettes of the exaggerated female form can be found in various guises across the Near East, the greater Mediterranean area, and also in Eastern, Central and Western Europe. Although they vary greatly in style, they are often sitting or standing with steatopygous forms comprising of corpulent buttocks and overexaggerated bellies and breasts.

Sculpted from raw clay, the simplistic form of this idol has been naively created by strategically placed cuts and moulding. The rounded legs were probably made from the soft clay being formed into a ball and then cut to divide the two limbs. The flat body protrudes at the stomach, suggesting that the idol represents a pregnant female. The shoulders are squared off, with the moulded arms pressed against the front of the body, it almost appears that she is holding a round item in each hand. This can also be seen in the Nea-Nikomedeia idol on display at the Archaeological Museum in Veroia, where the idol appears to be holding an item in one hand, and another tucked under her left arm. We can only guess as to the symbolism of this.

The head of the idol is formed of a simple straight long solid cylinder of clay, facial details are extremely minimalist, the nose created by the artist pinching the clay, and the eyes and eyebrows are single straight cuts on the surface. There is no suggestion of a mouth.