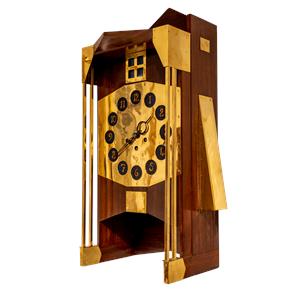 Gustave Serrurier-Bovy, a Belgian designer and architect, was one of the pioneers of Art Novueau. His work was strongly influenced by the British Arts and Crafts Movement, with which he came into contact during a visit to London in 1884. Serrurier-Bovy, who was already forty years old at the time, was fascinated with the strict, clear elements of this period of art, which inspired his subsequent designs enormously. Several revolutionary concepts followed, which were received extremely well in Europe among his contemporaries. Today, designs by Serrurier-Bovy can be found in major museums around the world – including the Museé d'Orsay in Paris, the Art & History Museum in Brussels, and the Metropolitan Museum of Art in New York City.

This clock shows great parallels to objects of the British Arts and Crafts movement. In particular, the columnar struts of brass and the wedges on the side look like architectural elements. The dark African padauk wood is skillfully interrupted by the golden brass plate with inset glass tiles by Loetz. The centerpiece is crowned by four cut-out squares in a brass plaque. An iconic design from around 1905, this clock is an impressive piece of art from the period. The clock has a quarter hour strike with a full 'Westminster' strike every hour. The movement has been overhauled and is fully functional. A key is enclosed.