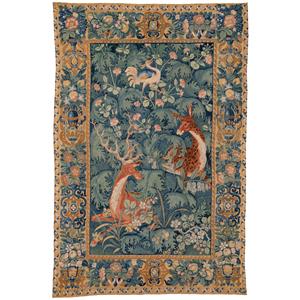 Large-leaf verdure with stag and doe
Southern Netherlands, second half of the 16th century
Wool and silk
270 x 178 cm

Description
A red deer with a ruddy summer coat and impressive antlers rests in the lower left corner of the picture plane. He is looking at the doe that is hiding slightly higher up on the right among the foliage. The large, curled acanthus leaves in different shades of green dominate the picture plane of this decorative verdure. Numerous flowers grow through the leaves and enliven the whole. In the centre at the top, an exotic bird with blue-yellow plumage steps through the foliage. The greenery provides a fitting backdrop for the idyll in which the animals find themselves. The clearly defined border consists of grotesque ornaments between fruit, flowers and leaves on
a pale-yellow background.

Style
This tapestry belongs to the genre of large-leafed greenery, a new genre that became popular in the mid-16th century as room decoration. In the first half of the 16th century, interest in the study of plants and animals increased. A tapestry with greenery brought nature into the homes of the wealthy bourgeoisie and the aristocracy. The greenery dominates the picture plane, often adorned with flowers, and inhabited by all sorts of animals. The many minute details that hold the viewer's attention are genre-specific for this kind of verdure. The precursors of this genre were the mille-fleurs, tapestries studded with flowers, which were in vogue in the late 15th and early 16th centuries.

Comparable tapestries
The Art Institute of Chicago has two interesting cabbage leaf tapestries in its collection. These tapestries can be attributed to the Oudenaarde production centre. On a Great-leaved verdure with birds (1545-80), there is a weaver's mark that is attributed to an Oudenaarde weaver. Both tapestries are preserved by the Koninklijke Manufactuur De Wit. In the collection of the Snijders & Rockox House in Antwerp, there is a Verdure with large cabbage leaves from the middle of the 16th century that is attributed to the Geraardsbergen production centre.

Location
Large-leafed verdures were woven in virtually all production centres in the Southern Netherlands. A study of the borders, the type of foliage, the use of materials and the corresponding structure of the fabric can provide an indication of assignment to a production centre. Stylistically, too, some minor differences can be noted. Without the presence of the town mark of a production centre, however, it remains impossible to locate a tapestry with certainty.