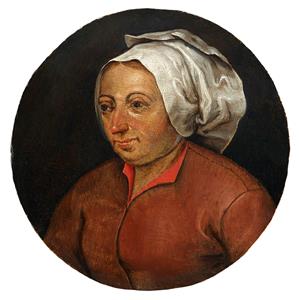 This small pair of round panels features a portrait of a lansquenet and that of a peasant woman, painted by Pieter Brueghel the Younger. Mercenaries and pikemen of German origin, the lansquenets were familiar faces to the inhabitants of the Netherlands during the Eighty Years' War. The bright red beret, with its flamboyant white feather worn by the man, was typical of the uniform of these soldiers. In contrast, the woman is wearing a simple white headdress and traditional rural garments.

Portraits or studies of faces are rare in the work of Brueghel the Younger. These two panels are a significant recent addition to the master's corpus, which only consists of six works. There is a Portrait of a Lansquenet that the Fabre Museum in Montpellier has attributed to Pieter Bruegel the Elder. But if we compare the two portraits, our panel has a more spontaneous style of painting owing to the lively impasto and the dazzling white feather. As for the Portrait of a Woman, not only is it unique in Brueghel the Younger's paintings, but it is the only portrait of a woman in a round format known today. Nevertheless, it presents stylistic affinities with certain portraits of women painted by Martin van Cleve.

The tondo was Pieter Bruegel the Elder's favourite format to depict individual proverbs, many of which were produced in series or pairs. The quality of facial expressions such as that of the Yawning man has led some researchers to associate these faces with the seven deadly sins. According to this hypothesis, the Portrait of a Lansquenet would then be anger and the Yawning Man laziness. However, the haggard look and gaping mouth of the soldier clearly express surprise and can't be associated with anger. Although Pieter the Younger was clearly inspired by his father's model for the portrait of a man, he deliberately combined it with that of a woman. These two panels are perfectly identical in size, indicating that they were designed as a pair.

These particularly expressive studies of faces, which can be described as portraits, can also be associated with a genre specific to the 17th century: the tronie. This Dutch word meaning "face" describes a genre of painting that combines elements of portraiture, historical painting and genre scenes. The artist usually depicted an exaggerated facial expression, an original state of mind or an eccentric character. Pieter Bruegel the Elder painted several tronies, but few have survived. After his death, his studies of peasant faces were reproduced through engraving. The characterisation of the facial expressions in Adriaen Brouwer's portraits clearly reflects the legacy of Brueghel.

It therefore seems obvious that Pieter Brueghel the Younger was inspired by his father's model. The woman's portrait, with its simple appearance, is a type that appears repeatedly in Bruegel's depictions of peasant life. The lansquenet, with his moustache and hat, is reminiscent of a similar character already present in the Adoration of the Magi (London, National Gallery). This wonderfully preserved pair of panels gives us a remarkable insight into the art of Pieter Brueghel, who knew how to observe Man and paint his particularities with a disconcerting precision.