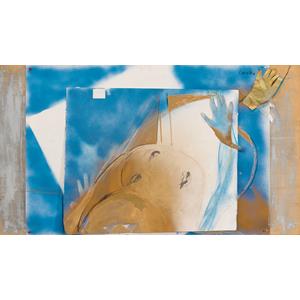 Marisa Merz (Turin, 1926-2019) is one of the central figures and the only woman artist involved in the historic Arte Povera movement. Known for her use of unusual materials, such as copper wire, clay and wax, Merz created sculptures and drawings that reflected a poetic sensibility and gently unfolded her vision of art and life.

Marisa Merz began to incorporate everyday and organic materials into her work, in an effort to challenge the elite status associated with artworks in the consumer culture of modern capitalism. Using abstract and organic figures, Merz creates familiar portraits and sculptures that emphasize subjectivity while conveying an ever-changing message and the artist's belief that all form is fluid and should be able to transform into any other form.

Furthermore, in his works, the image of the face emerges as a symbol of the eternal human spirit. These faces are characterised by fleeting lines and abstract forms. Merz's figures defy expressions of individual identity and resemble ghosts while seeming detached from any kind of social or narrative framework, as if they were floating forever through time.