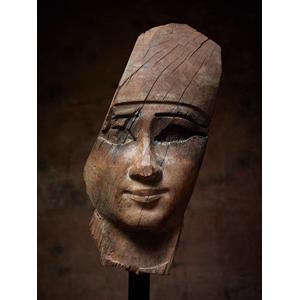 This haunting and compelling face, skillfully carved from a single piece of wood, would have adorned the lid of an anthropoid coffin. Unlike the elaborate and bright polychrome cartonnage embellishments that are ubiquitous to pharaonic funerary fittings, this sublime visage was reserved to be simplistically denuded. Although particularly rare, such faces from anthropoid coffins that bared their natural wood were often utilized as the middle section of a three-coffin ensemble, especially during the Third Intermediate Period and Late Period, in the first half of the first millennium BC. Wood was an exceptionally rare commodity in ancient Egypt and was likely imported from far-off regions, such as Lebanon. As such, a solid wood coffin was a clear indication that the owner was a person of high social status and remarkable wealth.

While the majority of the surface of this upper portion of the coffin remained unadorned, the eyes, cosmetic lines and conforming eyebrows were deeply hollowed to receive rich inlays of bronze, faience, glass, obsidian, or other precious stone. These dramatic additions would have enhanced the countenance with a spiritual and luxuriant quality that animated the hard wood. A mortise below the chin indicates that it was also ornamented with a false beard. Such an attribute indicates, on one hand, that the coffin was likely meant for a man. But the false beard is even more indicative of a connection between the deceased and Osiris, the primary Egyptian deity that oversaw death and the afterlife. True beards of facial hair were an attribute worn solely by foreigners in Egypt, whereas a long plaited upturned beard was universally recognized as one of the main physical traits of Osiris. The appropriation of the god's beard was a symbol that the deceased would be invoking the protection of Osiris throughout his journey to the afterlife. In addition, the anthropoid coffin was thought to represent the deceased's sah, or divine being, which was directly associated with Osiris. It was believed that the coffin itself had the ability to transform the remains therein into an image of the divine Osiris.

The coffin was the most significant of the funerary furnishings in ancient Egypt that was imbued with deep religious significance and magical power. It was believed that the coffin physically became the avatar for the deceased on the journey toward the afterlife. As the centerpiece of the tomb, the primary intended purpose of the coffin was to protect the body of the deceased, assisting in the preservation of the physical form, which would guarantee a smooth transition to the afterlife and the reunification of the body with the soul. The added layer of this intermediate inner coffin further protected the body for this final journey.

Although quite contrary to our modern way of thinking, the ancient coffin was an object concerned primarily with life, rather than death. For the Egyptians, the coffin represented the living being and a new home for eternity; death was merely a transformation to a different state of being, where life continued, rather than concluded. The meticulous attention to detail and consummate skill evident in the design, decoration, and construction of a coffin, especially one incorporating several elements, is informative of the status and identity of the individual for whom it was commissioned.

The physiognomy of the facial features on the present example are youthful and idealizing. They portray the individual as eternally at peace, with the modest simplicity of the barren wood concealing the flaws and blemishes of his well-worn years. The wood has been masterfully manipulated to create the soft minimalism of a dimpled smile that has left the deceased in a perpetual state of bliss.