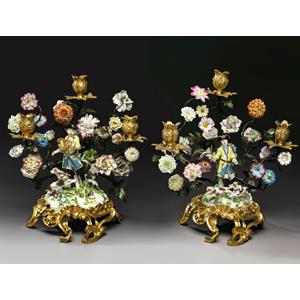 These pieces are unique because of the mounting made especially for them. They combine Saxon craftmanship with exquisite French artistic taste.

During the Absolutist era, hunting as a noble passion was a privilege of the aristocracy and constituted an important part of the ‘officium nobile’. In the eighteenth century, this courtly ceremony as an act of stately magnificence, at which hunting was practised more in the sense of a courtly celebration with illustrious guests from all over Europe, developed into an act of especially exalted splendour, leading in Saxony to the magnificent remodelling of Hubertusburg under Augustus III as the largest hunting lodge in Europe. In 1721 the foundation stone was laid for a splendid new palace that was already completed by 1724. After the electoral prince had ascended the royal Polish throne in 1734 as Augustus III, he spent several months hunting here each year – except in times of war – and held an annual celebration in honour of St Hubert, patron saint of the sport, on 3 November. His reign saw the production of numerous pieces of porcelain decorated with hunting themes, including the present pair of hunting groups.
They originally were figural ornaments of the cover of hunting vases, but where then adapted as autonomous figural groups. Johann Friedrich Eberlein can be identified as the modeller of both hunters with hunting dogs from a detailed description in his work reports: ‘Einen dergleichen [Sterz] etwas kleinere, worauf ein Jäger nebst zweyen Hunden’ (‘Another somewhat smaller [cover] of the same kind on which stands a huntsman with two hounds’) (Meissen Manufactory Archives, I Ab12, fol. 99). The huntsmen are clad in the yellow and blue ‘parforce’ hunting livery of the Saxon court and wear black riding boots and a gold-trimmed tricorne.