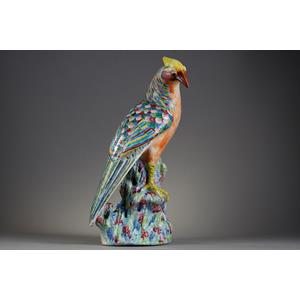 Technically, this object is remarkable because it is a true animal sculpture and this type of three-dimensional representation is among the most sought after.
Secondly, it is made of porcelain and it is known that the larger the pieces (here 35.5 cm), the more likely they were to sag or split during firing.
This representation is intended to be naturalistic, since it is a golden pheasant, a species originating from China that was introduced into Europe at the beginning of the 18th century and was very popular with aviary owners (the Marquise de Pompadour had one at Trianon) for its shimmering colours, as reproduced here. The proportion of these birds in porcelain was 50 to 80% of the animal representations among collectors.
Its provenance is prestigious as it comes from the famous Nicolier gallery located at 7 quai Voltaire (in the 7th arrondissement of Paris), which was, until 1995 (date of its definitive closure) the most important French gallery specialised in ceramics.