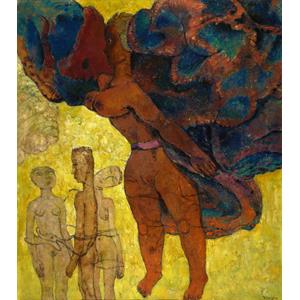 In a more or less veiled form, the threat is almost persistently palpable in this work from 1932, the artist's later period. Everyone recognises the feeling explicitly in works such as Panic Among the Animals (1936) and The Cruel Angel: inner turmoil and panic projected in a world dominated by a primal fear that cannot be brought home. Furthermore, monsters, composite animals and all sorts of indecipherable monstrosities arouse related emotions. Finally, there is the gathering of (identical) figures, apparently or realistically presented as a collective. At times they are each in their own assigned zone - the image of an icy solitude that cannot be undone.
Around 1930, Frits Van den Berghe repeatedly dealt with the theme of the angel. The painter removed the figure from its Biblical context and placed it in an unworldly, menacing setting. The cruel angel – from the old collection of Ghent politician Edward Anseele, a friend of the painter – has retained none of its traditionally asexual appearance. By emphasising femininity, the scene takes on a strongly alienating character. The female angel literally outshines the three mortals in the left corner who seem to be resignedly awaiting their fate. Their lost nudity differs greatly from the almost exhibitionist angel figure, with her highly pronounced breasts and labia drawn in detail.
Typical of Van den Berghe's late work is the clenched imagery in which conflicting emotions meet. In it, human existence is reduced to its essence, depicting universal drives such as fear, anger, restlessness and alienation. Sometimes man is captured in his solitary solitude, and then again, as masterfully in The Cruel Angel, he comes together in a group, and yet again he does not; these figures also find no security with each other. The oppressive atmosphere exudes a fear of death, with the Angel of God becoming rather the angel of death, threatening man's primary existence. The cruel angel thus confronts him with his finitude that threatens man in his primary existence.
In its simplicity, the performance presents a clenched image of being human. Naked, lonely and stripped of all worldly wealth, he must suffer his fate. In doing so, the scene seems to be a modern translation of the theme of doomsday, which has been much loved since the Middle Ages.