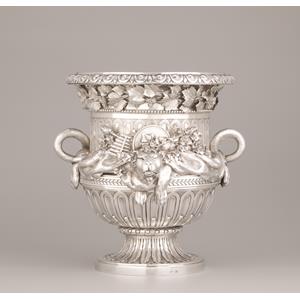 Silver wine cooler
Vienna, 1782
Master Silversmith Ignaz Joseph Würth
Wine cooler with a splendid high relief depicting two lion skins surrounded by ivy and musical attributes. The two lateral handles representing the tails of the lion are cushioned on the body by the lower legs of the animal
H 28.8 cm (the bucket), Ø 24.6 cm (the cup) - Weight: 6.200 gr. the whole
Provenance: part of the service made between 1779 and 1782 for Albert de Saxe-Teschen, governor general of the Netherlands, for the use of the Schonenberg castle, now the castle of Laeken in Brussels
Literature: E.W. Braun, Das Tafelsilber des Herzogs Albert Von Sachsen-Teschen, Vienna, 1910

Born in 1738, Albert-Casimir was the son of the King of Poland and the Elector of Saxony, Frederick-Augustus II. In 1766, he married Archduchess Maria Christina, the daughter of Empress Maria Theresa of Austria. Appointed Duke of Saxe-Teschen, he successively received the governments of Hungary and the Austrian Netherlands. In 1910, His Imperial Highness Archduke Frederick organised an exhibition in Vienna where the cooler was inventoried as a series of 'eight champagne buckets.' In 1947, the service was dispersed at the Fischer Gallery sale. This service remains the only example of Viennese silverware from the second half of the 18th century that was spared from the ravages of the Napoleonic wars. Throughout the 18th century, these illustrious masters worked in Vienna and carried out the largest orders in the service of the court.