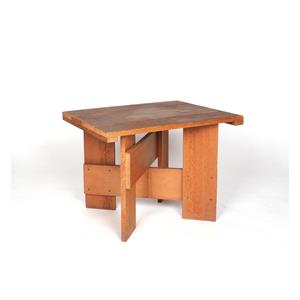 ‘Krat meubels’ (meaning ‘crate furniture’), as the Dutch architect and designer Gerrit Rietveld called them, date from 1934. At first he designed a chair, a cupboard and a low table. A small desk was added to the series a year later. Rietveld described this simple furniture as being made according to the ‘free carpentry method, which goes straight to its purpose’. According to him, the equal width of the parts and the open seams project a calm image. The furniture consists of an honest construction in which nothing is concealed. Rietveld preferred to keep the crate furniture unpainted, like the table on offer here.

The avant-garde department store Metz & Co started to sell Rietveld’s ‘Crate Furniture’ in 1935 in Amsterdam and The Hague. They were presented in a separate folder as ‘Weekend Furniture’ for second homes or students' accommodation. This table is a special edition with a top consisting of four planks instead of three, made for the deputy director of the department store.