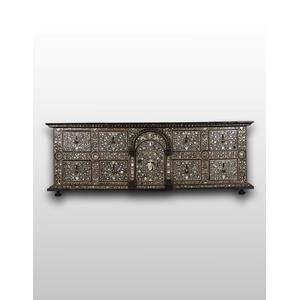 Cabinet
Wood, ivory and mother-of-pearl marquetry
Venice, early 17th century
H 47.5 x W 132 x D 28.5 cm
The cabinet has a fir-wood structure entirely covered with a rich naturalistic decoration in the Renaissance style, characterised by an intertwining of leafy spiral motifs, and medallions with fantastic animals, all made of ivory and mother-of-pearl inlays. On the front, there are eight walnut drawers and a central door that features a cardinal’s emblem with a heraldic shield in the middle with a checkered eagle, a coat of arms belonging to the ancient Roman Conti family, also known as the Conti of Segni (de Comitibus Signie). The family, owners of a vast feudal estate located in the territory of the Roman countryside, over time included four popes (Innocent III, Gregory IX, Alexander IV and Innocent XIII), numerous cardinals and bishops, and various military and statesmen. The mark of the three Cs engraved on the back of the cabinet in the middle of a circle corresponds to the initials of Cardinal Carlo Conti, as also confirmed by the coat of arms with cardinal attributes on the frontal door. Commissioned by Cardinal Carlo Conti around 1604, the year in which Pope Clement VIII raised him to the dignity of cardinal, the cabinet belongs to a significant corpus of furnishing made by a skilled master of Venetian origin who worked between the end of 16th Century and the beginning of 17th century.
Literature: Alvar González-Palacios, Le gout des princes, Art de cour des XVIIe et XVIIIe siècles, 1993, vol. 1, p. 294, fig. 587