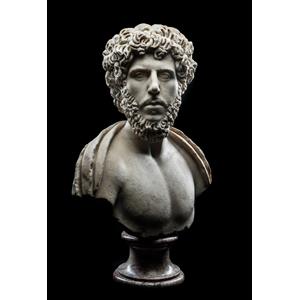 Portrait bust of a man, possibly Lucius Verus
Roman, circa 161-169 AD
Marble
H 73 cm (with base) x W 50 cm
Accompanied by Art Loss Register certificate S00212712, and IADAA certificate, this item has been checked against the Interpol database
Condition: nose was originally restored in the 19th or early 20th century as evidenced by the techniques and materials used, and also the iron staining from the archaic use of metal pinning. The nose has since been re-restored. Otherwise, in very good state of preservation with natural weathering as expected with age. Mounted on old collection marble base
Provenance: previously in a European private collection, 19th or early-20th century (based on restoration techniques); private collection of Dr Pierre Calvelli (1921-2015), Aix-les-Bains, France, from at least 1982 (accompanied by customs letter dated 4th June 1982, Switzerland to France), most likely acquired on the Geneva art market; thence by descent to his daughters Anne-Claude and Emmanuelle in 2015 (accompanied by French cultural passport 226780)

This impressive bust is depicted with head turned slightly to the right, and shoulders draped. The thickly curled beard and hair suggest that this could possibly be the image of Lucius Verus.
Roman Emperor from 161 to 169. Born Lucius Ceionius Commodus, the same name of his father, he became Lucius Aelius Commodus when the latter was adopted by Hadrian, since both father and son had to change their names accordingly. Throughout Antoninus' reign he was to remain in the shadow of the emperor's favourite Marcus Aurelius, who was being groomed to hold office. If Marcus Aurelius was granted the office of consul at 18 years of age, he had to wait until he was 24.

At the beginning of his reign, Verus was sent to the East to direct military operations against the Parthians, and although the war was concluded successfully in A.D. 166, his returning troops brought back the plague, which ravaged the Empire for several years thereafter. He is compared unfavourably with Marcus Aurelius by the ancient sources, but the portrait shown here has a leonine majesty that gives little indication of his reputation as an idle and dissolute ruler.