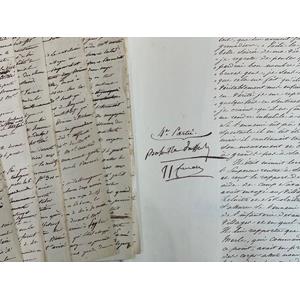 Napoleon Bonaparte (Ajaccio 1769-1821 Island of Sainte-Hélène), Emperor of the French
Manuscript dictated by the Emperor with autograph corrections by his hand. Set of 74 folio pages.
File gathering under a folder entitled 'Battle of Austerlitz' the following documents:
- Plan of the Battle of Austerlitz, on tracing paper. Hand drawing of General Bertrand. 34.5 x 50 cm
- Manuscript dictated by Napoleon to General Bertrand, corrected by Gourgaud with a clean update for some pages by Merchant. This manuscript is corrected in several places in the hand of Napoleon. 74 pages folio, sometimes half-filled. Account of the battle by its victor.

We are therefore here in front of a text which has been amended many times.

Origin: papers of General Bertrand brought back from Saint Helena.

Extremely rare manuscript written under the dictation of Napoleon, in Saint Helena. Relation of the battle by sound
winner.