The Art Critic
Pastel on paper: 123 x 97 cm / 48.4 x 38.2 ins
Signed and dated 'Herbert van der Poll/ 1927' lower left
Painter of portraits, animals, flowers and plants; draughtsman, etcher and lithographer.
Daniël Herbert Van der Poll was a pupil at the Amsterdam Academy. He lived and worked in Antwerp and Amsterdam. He specialised in painting animals, but he also painted flowers and plants. He was a member and secretary of ‘Arti et Amicitae’ in Amsterdam.
In 1925 he was awarded a gold medal by Queen Wilhelmina.
He taught at the Amsterdam Academy until 1942.

The text on the flag reads as follows :
Having failed living as a scholar or an artist,
I gave myself the job of art critic.
A work of art is created with suffering, toil, sweat,
but I need only to know “art jargon”:
Such as ‘intensly felt’ and ‘pure’ and ‘elementary’
‘growing from its soul’ and ‘rhythmically visionary’.
And what people long held to be outdated,
I applaud as “modern”, until people fall on their knees before it.
I stand at the head of art
fine artists hate me,
because I speculate
on people’s stupidity.
I am a great genius.
I existed before mankind.
FIRST I wrote about art,
THEN art was created. 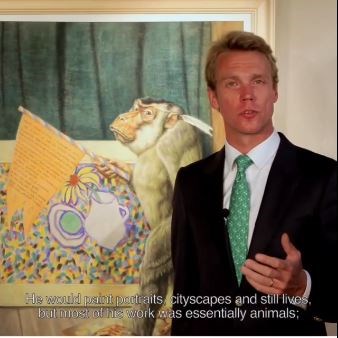