Today, we would like to present you the fifth work chosen for our Object in Focus project, aiming at shedding new light on some of the works in our gallery.

This month, we are going to focus on:
Gioacchino Assereto (Genoa, 1600-1650) - The Martyrdom of Saint Bartholomew. 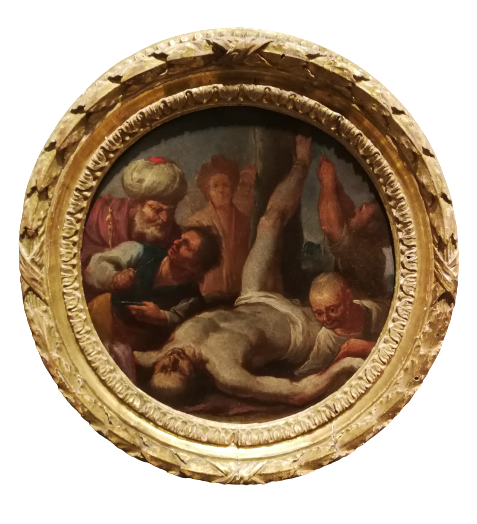 Oil on copper
20.5 cm (diameter)
This small work on copper is an interesting and exquisite addition to Gioacchino Assereto’s catalogue.

During his artistic training, Assereto specialised in the execution of small-sized works, perhaps encouraged by Giovan Carlo Doria’s taste for the ‘machie’, i.e. sketches executed very quickly and characterised by free and dynamic brushstrokes.

Doria’s passion for these kinds of works is mentioned by his biographer, Raffaele Soprani.

During his early career, Assereto produced several works ‘in piccolo’, such as the well-known Adoration of the shepherds at the Galleria Nazionale of Palazzo Spinola in Genoa, which is also on copper. 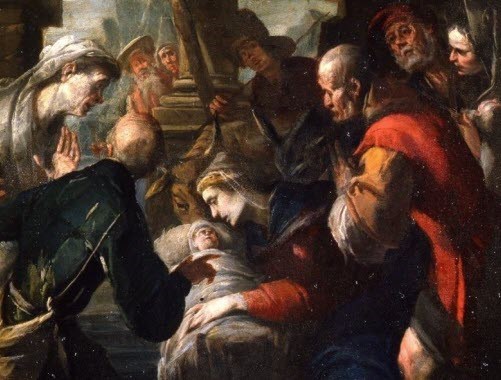 In this work, it is possible to see an echo of Luca Cambiaso’s style in the geometric harshness characterising some of the formal elements.
Our painting overcomes entirely this approach, which is typical of Assereto’s early works.

The apostle Bartholomew is only shortly mentioned in the Gospels, which do not mention any episode of his life.
The Legenda Aurea by Jacopo da Varagine, instead, narrates his missionary trip to India and the tortures he suffered in Armenia, where he died being skinned alive.
By stressing both the deposition from the cross and the beginning of the skinning perpetrated by two persecutors flanking the Saint, Assereto literally follows Jacopo’s text.

In the renowned version of The Martyrdom of Saint Bartholomew painted by Assereto on canvas at the Accademia Linguistica di Belle Arti in Genoa, the figures are crowded in the foreground, presenting a horror vacui feeling typical of the late-Mannerist taste. 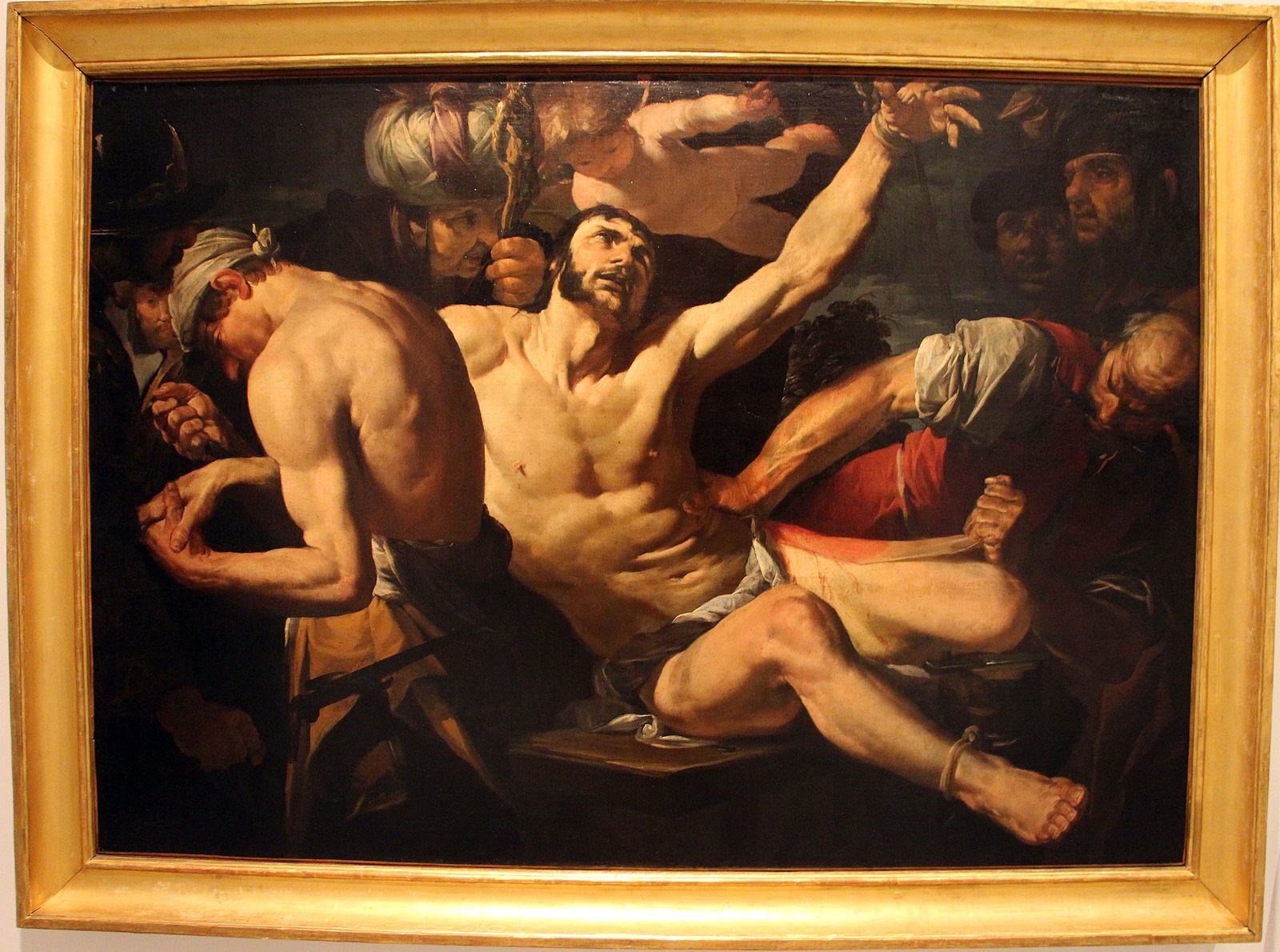 Conversely, in our painting Assereto experiments with a far more articulated composition.
Notwithstanding the limits imposed by the small size of the support, the artist creates a sense of depth by obliquely presenting the upside-down body of the Saint.

This stylistic choice results in a strong sense of spatial breath.
The construction of the scene is dictated by diagonal trajectories projected in the third dimension and the brushstrokes are characterised by immediacy and spontaneity.

These stylistic elements indicate that the painting was realised around the mid-1540s, when Assereto was working on compositions presenting comparable structures.
In particular, it might be worth looking at the artist’s development of the theme of Marsyas skinned by Apollo, represented in fresco and on canvas in Palazzo Ayrolo-Negrone in Genoa. 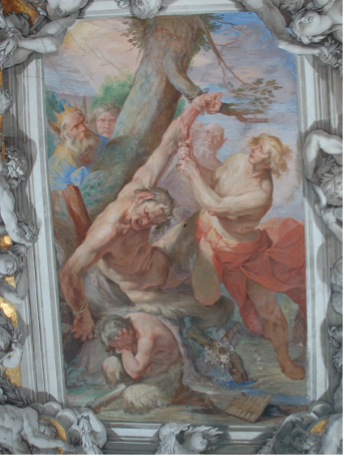 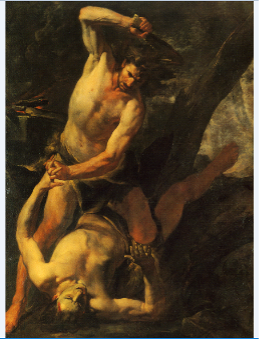 The composition of these works – including the one of our painting – seems to imply that Assereto knew the Apollo and Marsyas by Ribera either in the two versions in the Museo di Capodimonte in Naples and in the Musée Royaux des Beaux-Arts in Bruxelles - both signed and dated 1637 -, or from other versions probably available to the artist in the Genoese artistic environment. 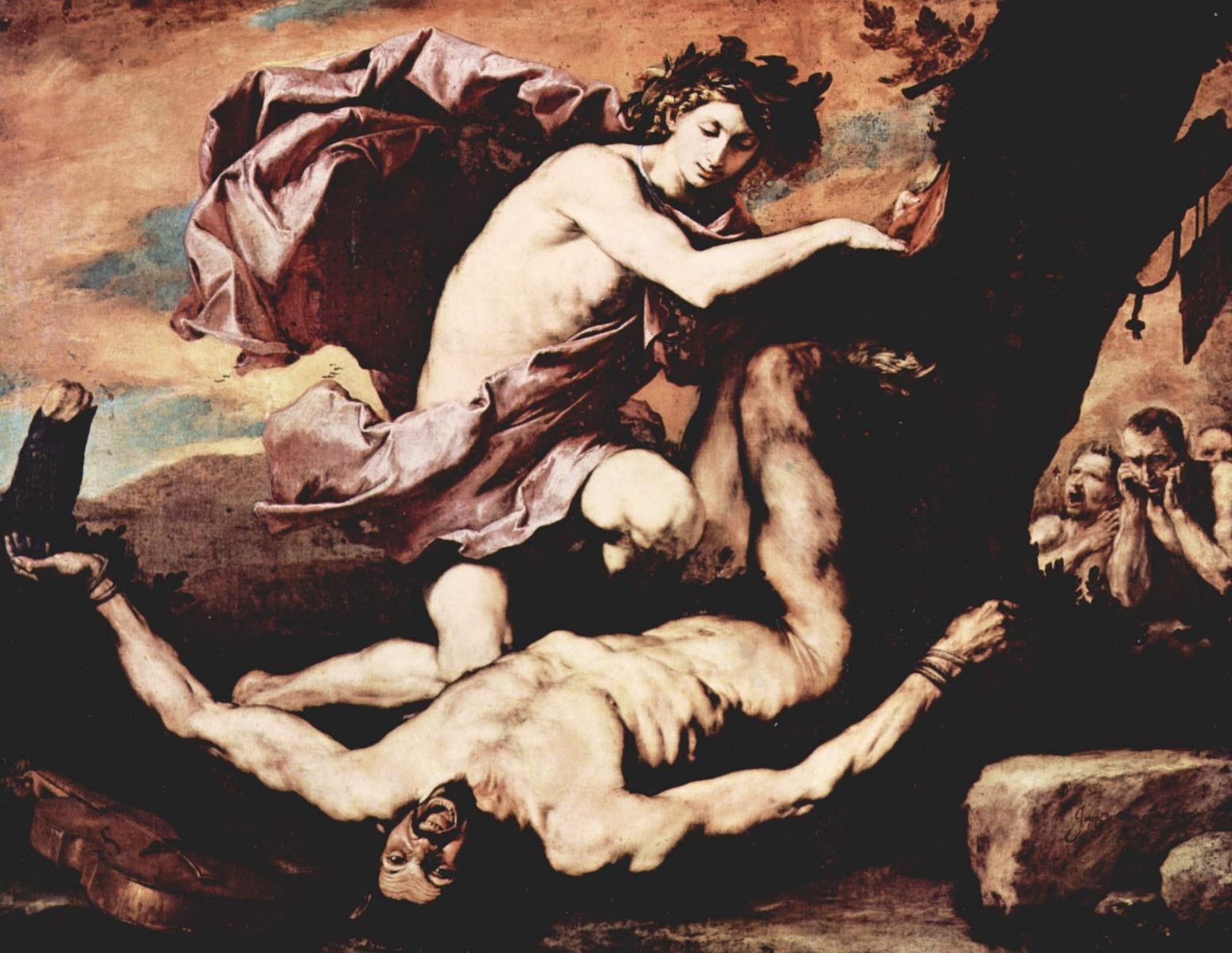 Assereto’s interest towards the theme of Saint Bartholomew’s Martyrdom is documented also by three paintings representing this subject listed in the artist’s inventory written at his death on 31st July 1650.

Please click here for a PDF version of Tiziana Zennaro's expertise and visit our website for more photographs and information about this marvellous copper painting by Gioacchino Assereto.

We hope you enjoyed this initiative and we look forward to hearing from you
for any queries and further discussions.