After its success in Knokke, the exhibition Resistance will be presented in the Brussels’ gallery in a new form. While the exhibition in Knokke focused on the black color and its meaning in art, the new exhibition Resistance(s) will revolve around the theme of art as a mean of resistance. Using a thematic approach, the exhibition studies how resistance falls within a body of artworks from different contemporary international artists working in diverse media. The show reflects on political, ecological, social, and cultural questions that shape our current time, focusing on the act of resistance. The act of resistance is defined in the Oxford dictionary as being “the act of using force to oppose someone or something, the situation in which people or organizations fight against something or refuse to accept or be changed by something.” 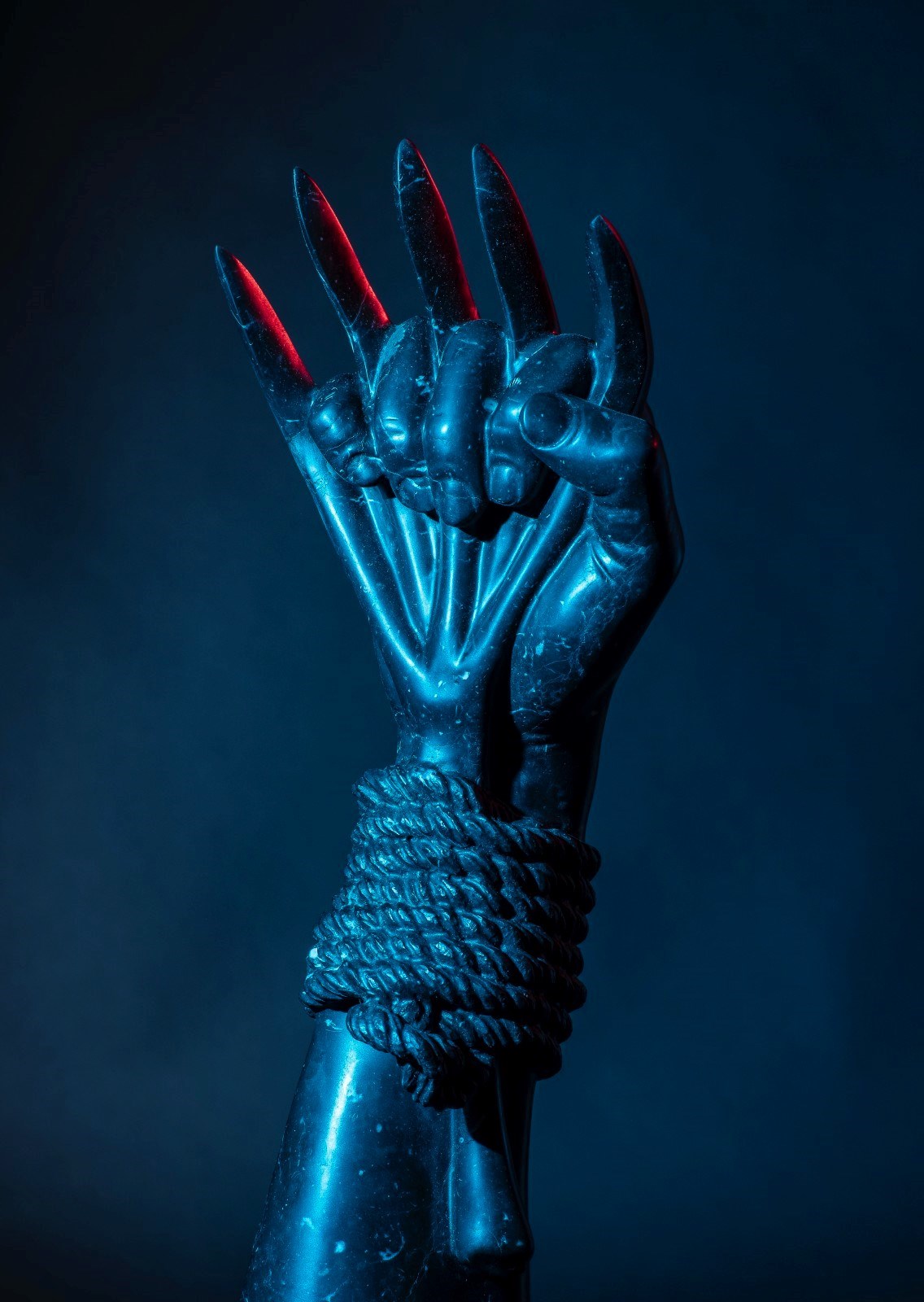 Hank Willis Thomas, Resistance in Black, 2021
Nero Marquina Levigato marble, 56.3 x 11.2 x 15.3 cm I 22 1/8 x 4 3/8 x 6 1/8 in
Edition of 6 + 2 A.P.
During the 1930s, artists and writers in many parts of Europe went into resistance. In Germany, after the second World War, artist groups like the Cologne Progressives as well as the Communist painters continued to support freedom of expression, despite arrests and persecution. Traumatized by the assaults suffered by his native country, Pablo Picasso painted in 1937 Guernica, one of the most monumental works of resistance of the twentieth century, managing to create a politically committed work.

For the French philosopher Jacques Rancière, politics and aesthetics are deeply connected and need to be seen as a whole. Every art practice is political in that it either solidifies or questions the symbolic structure of society, as also underlined by the Belgian political philosopher Chantal Mouffe. This political feature of artistic creation challenges the consensual discourses on the neutrality of art and aesthetics. Contemporary artists have opened up new areas of consideration for the spectators, and the increasingly political and social dimension of contemporary art has given rise to the question of the role of the artist in today’s society as well as the relationship between the aesthetic and activist dimension of a work of art. They investigate how art can provoke greater social awareness and responsibility. 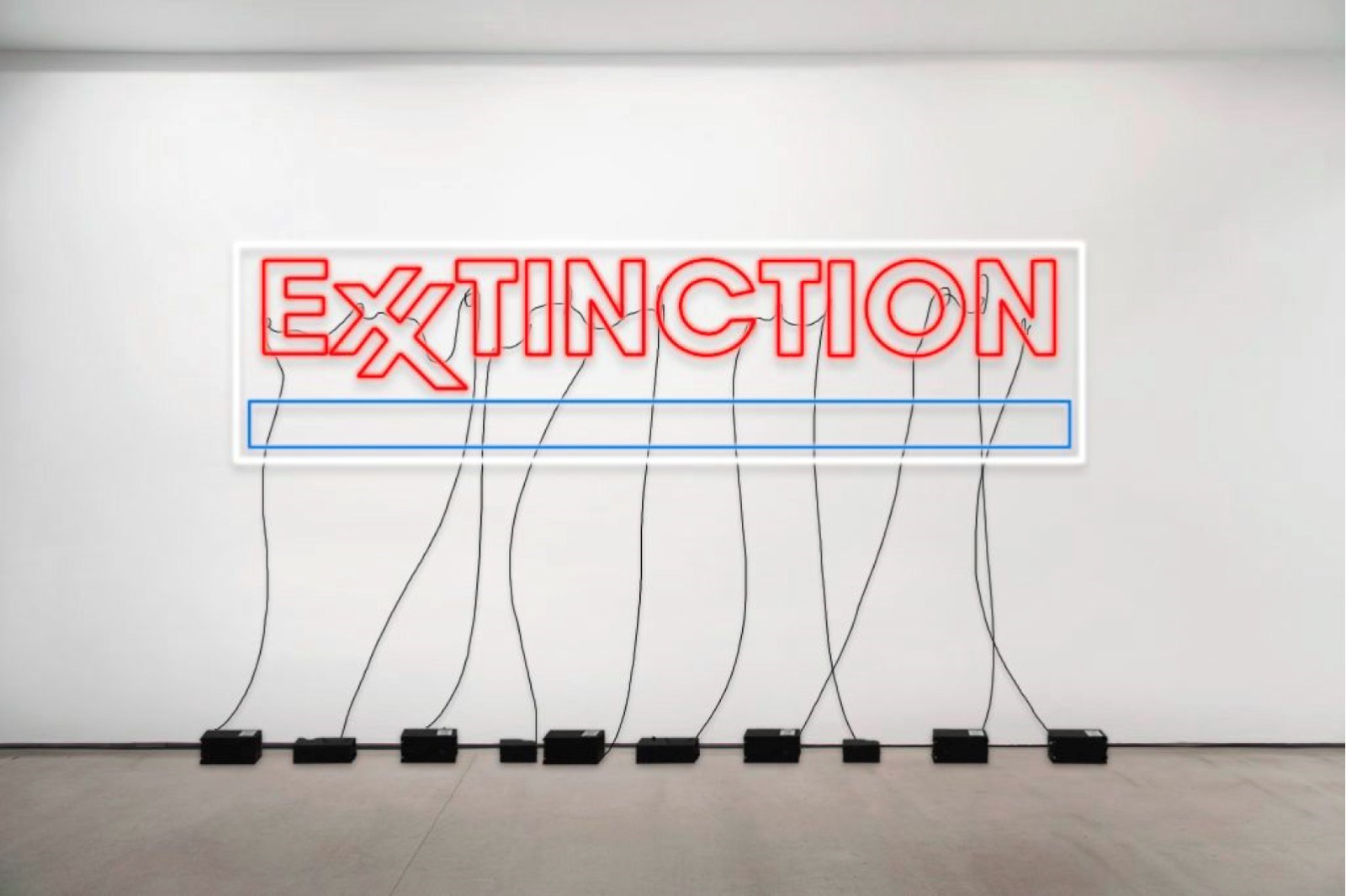 Justin Brice, Exxtinction, 2019
neon, 49 x 184 x 14 cm I 19 1/4 x 72 1/2 x 5 1/2 in
The exhibitions sheds light on crucial contemporary African and Afro-American artists like Rashid Johnson, Radcliffe Bailey, Hank Willis Thomas and Kwesi Botchway. These artists, referring to their culture, are engaged in a political battle against racism, blaxploitation and the history of slavery and colonialism experienced by their ancestors.

The central piece of the show Resistance a sculpture by Hank Willis Thomas draws upon the history of the Leopard (Anyoto) Society, a secret society active from 1890-1935 across West Africa. Although it was a society established for political emancipation and empowerment as a way to circumvent colonialist rule, the Leopard Society is depicted by-and-large as violent, evil, and sexually promiscuous in popular culture and the Euro-centric imagination, which can be traced through the dissemination of the Tarzan stories, Tintin comic, Disney motion pictures, and beyond. By isolating the claw of the “leopard” individually, Thomas draws attention to its symbolism of power, unity, and community.

While some of the works presented in the exhibition have a political undertone, not only mentioning socio-political matters but also responding to an environmental urgence, like Justin Brice and Tony Matelli, other works are leaning towards an artistic resistance, a resistance to a specific art movement like Bill Jensen’s abstract work with unconventional compositions and a profound sense of color or Paul Kremer and Nathlie Provosty’s persistence of use of monochrome colors. In the same way, Hermann Nitsch’s painting sits outside the canon of classical painting, inspired by his actions creating paintings made with unorthodox materials such as oil and blood.

On their part, Hiroshi Sugimoto’s photograph and George Shaw’s painting explore the philosophical notions of space and time, imagination and reality, science, and history. In Sugimoto’s Chiesa Rossa an important element that comes to light is spirituality, evoking a certain resistance to time.

The resistance found in David LaChapelle and Stefan Brüggemann’s work tends more towards a critique of our society. David LaChapelle’s Icarus suggests that humanity has fallen amid the ruins of a throwaway digital society. In Hyper-Palimpsets, the artist combined layers of political and cultural history with his timeless and iconic text statements.

The exhibition is completed by the more conceptual and playful works by Sherrie Levine and Gavin Turk, addressing issues of authorship in art. Often employing everyday objects or manufactured items, their works deal with issues of identity, especially those pertaining to an artist’s name and signature.

At the core of the show, the role of artists unfolds as the key player of an activist thought, somewhere between resistance and aesthetics. All in all, the exhibition explores the different possible interpretations and aesthetics of the term Resistance, seeking to build a socio-political consciousness among the spectators.

Middelheim Museum is situated where the Colonial College was founded in 1920. A hundred years later, this exhibition examines and unfold the traces of the (post) colonial history of the site. With works by 15 international artists, Congoville present new and different perspectives to a history often told from a single perspective. Selected works by Thomas include 100 Dollars Ivory Tower;
Antwerpse Handjes; Brabo, Antwerp, Belgium to Boma, Congo at Dakar; Brabo and the Ivory Tower and Justice, Peace, Work (Stolen Sword Punctum).