© Jan Liégeois
Entitled Les Belles ldées reçues, this new series of paintings by Angel Vergara presented at Axel Vervoordt Gallery, finds its origin in his participation during the last Manifesta. The 13th iteration of this nomadic Biennial found place in Marseille. Angel Vergara connected with the locality of this city through a preliminary series of workshops conducted with two groups of children, at a school for the visually impaired and via a non-profit community association active in social housing. These encounters lay at the root of the multiple Straatman performances conducted in the streets of Marseille, where the base layers for these paintings were created. Afterwards, the canvases painted on the streets of Marseille during Manifesta 13, travelled back with the artist to his studio in Brussels, where new layers were added. It is here that the paintings, through multiple artistic interventions, found their final form. 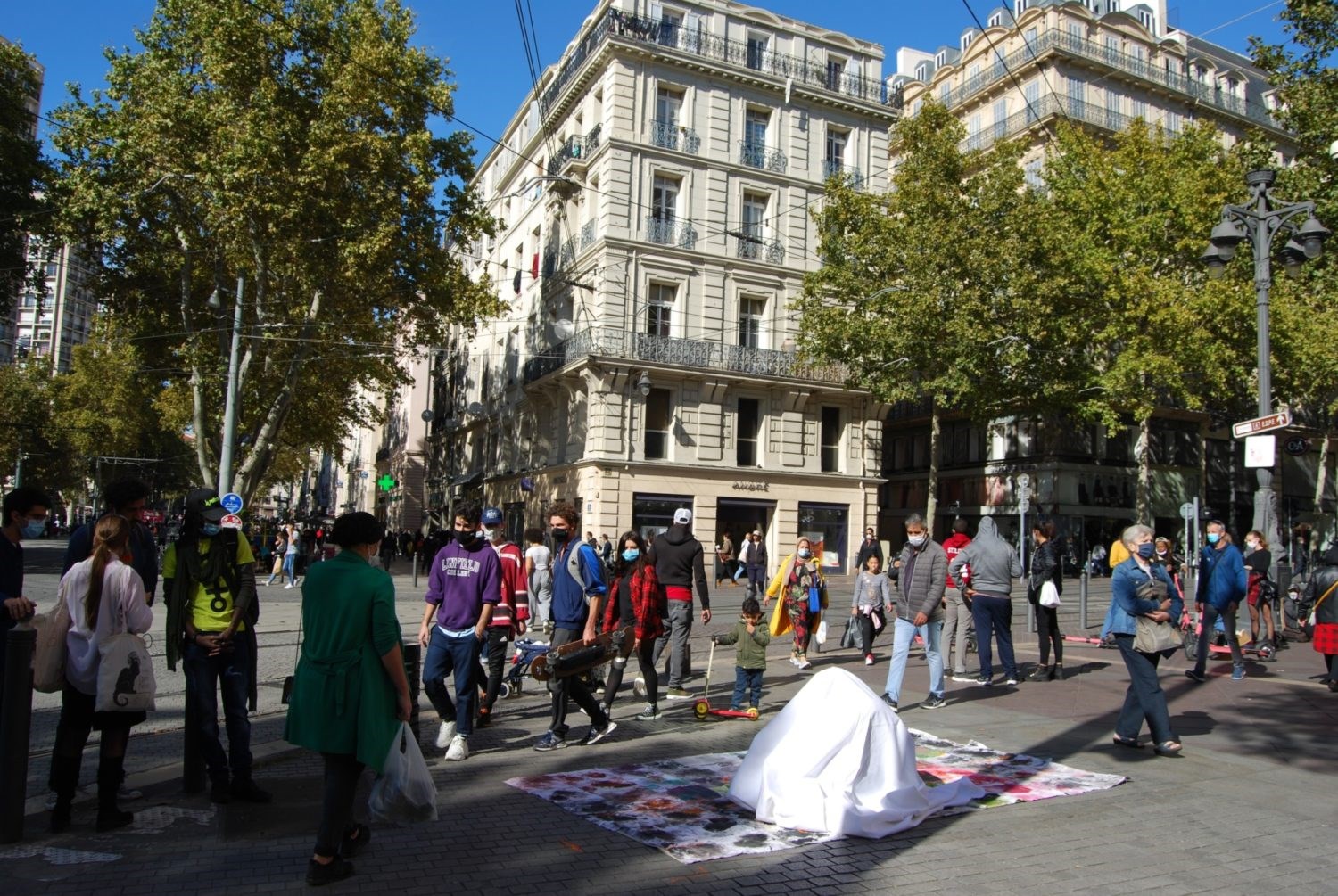 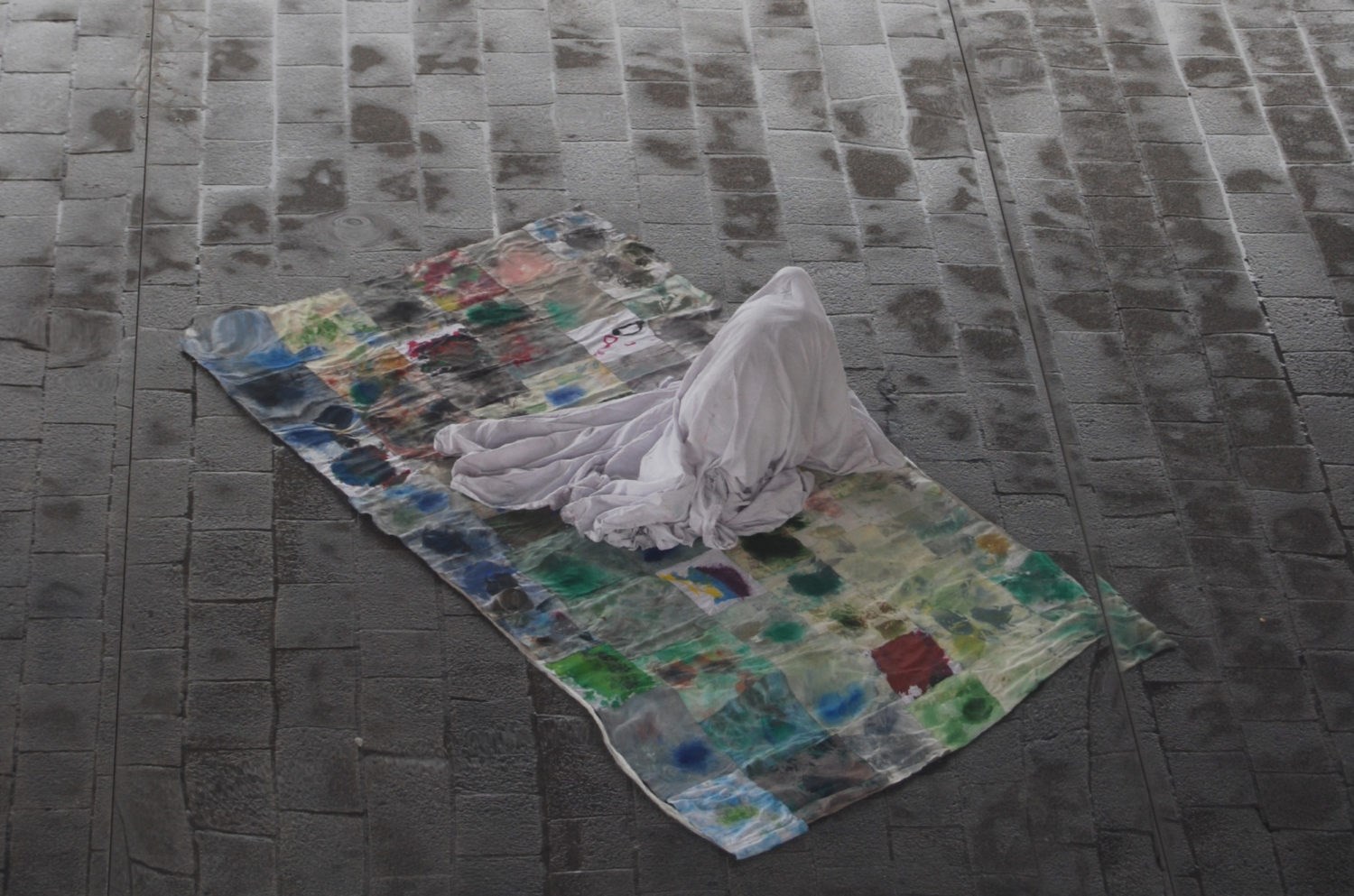 Performance of Straatman during Manifesta 13 in Marseille
The canvases form an inevitable yet compelling mental space created by the artist, which can be seen and interpreted in infinite ways. It's exactly this paradoxical reading that lies at the core of these works, characterised by dialectics and opposites. In 2o2o we were proud to present a series of paintings by Angel Vergara called J'efface, et cela apparaît at our gallery. Where these works originated in the artists' studio and were later finished and adapted by Straatman - Vergara's alter ego hidden under a white canvas - in public space, Les Belles Idées reçues turned this process around: the base layers were created in the aforementioned workshops with kids and on the streets of Marseille, to then be finished in his studio in Brussels. The dialectic logic of public versus private got reversed: these and antithese switched places, altering the outcome of the synthesis.

© Jan Liégeois
When concentrating and taking the time, the attentive viewer can still catch a glimpse of those initial "belles idées reçues" through the newly added layers. The texture already reveals the patchwork of small canvases that constitutes the whole, where sometimes a frivolous and naïve rainbow or stick figure painted by a child shimmers through. The longer we look, the more the canvases seem to transform and mutate. The impressions left at first glance, might have changed fully by the time one leaves the space.

Vergara seems to create a doorway to another world, inviting the viewer to come closer and plunge. It's this relation between the body and the work that is so essential and becomes apparent when standing in front of the painting. All of this can also be found in the performance and persona that is Straatman: at the 43rd Venice Biennale in 1988, Angel Vergara covered himself for the first time with a white sheet, in front of the Belgian pavilion then occupied by Guillaum Bijl. It's in this moment that a nomadic studio was born, or what the artist would call "a place to paint". Though apparently an anonymised act, it also allows the artist to immerse himself in public space, at the same time contaminating it with his presence. This reveals the social and political layer in the work of Vergara, never not aware of his role and position in the (art)world.

More at this link.