Pop, plants, pathogens and petri dishes. These are just some of the visual associations that find their way into the rich complexities of Lisa Vlaemminck’s undulating painterly universe. Inclusive of forms often recognizable, although slightly skewed from the familiar, Vlaemminck’s paintings provide glimpses into trippy recherché regions from the microscopic to the interstellar, as well as the amorphous spaces in between.

In worlds without gravity, vivid shapes hover in metabolic stasis. Contained at the boundary of their distinctly sharp borders, these forms are comprised of complex patterns that offer illusionary depth as well as perceptual flatness. Pulling from conventional visual vocabularies of painting tropes, still life subjects such as potted plants or bowls of fruit offer an armature for images to be built out from, remixed and re-encountered under new eccentric parameters. Brushwork often takes on the semblance of vases, vials, flutes, beakers, and decanters forming post-modern amoebae that dance across the surface. In these works definitions between signifier and signified become as equally viscous as the embryotic fluid that casts them in a kind of suspended animation. The semi-translucent membranes of alien flora frame multitudinous layers of under painting, offering vignettes into the atomic structure of the composition: florescent molecules comprised of individual gradient brushstrokes. 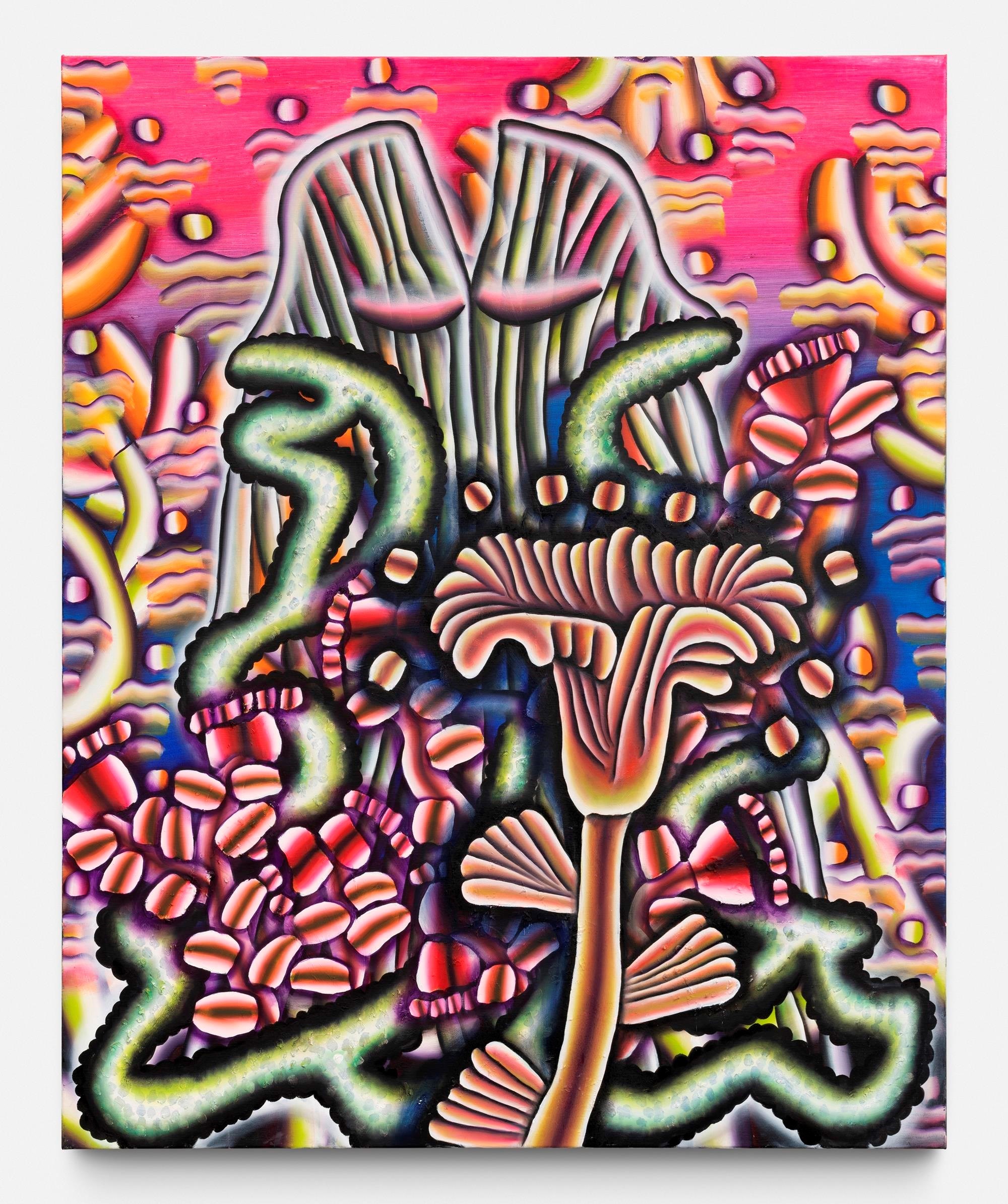 Plastic roses blossom into blooms that never wither, never rot. Working from the remnants of representation often culled from the simulacra of the faux, the work of Lisa Vlaemminck remixes canonical domestic subjects through a form of gyrating 21st century abstraction. By placing imagination before perception, the intertwining of image, material, form, texture and shape mutate into radiant compositional playgrounds that levitate in fantastical realms. These hermetic objects, both sealed within the frame of the picture as well as the borders of their shape, offer viewpoints to loose oneself inside the sumptuous temptation of their product. Here images coerce the spectator from behind sheer plastic shells, mounted in perfect stasis; however, once the package is broken open, the contents leave behind the microcosm within their casings to coexist alongside the macrocosm of our very own.


About the artist
Lisa Vlaemminck (born in 1992 in Brussels) lives and works in Brussels, Belgium. After graduating at KASK in 2015, her works were included in several personal and group exhibitions at rodolphe janssen, Brussels; BOZAR, Brussels; CIAP, Hasselt; Triennal Bruges; Tatjana Pieters, Ghent; and more. Her work is included in Collectie FOD Buitenlandse Zaken, Belgium; Collectie Vlaamse Gemeenschap, Belgium and a permanent installation at DoRemy daycare, Leuven, Belgium.