This exhibition brings Stefan Brüggemann’s Hyper-Palimpsest and On Kawara’s Today series together for the first time. The works share a central concern in their engagement with the experience of time and being in the world.

Where Kawara’s work explores these ideas in series, developing his investigation from one canvas to the next over the course of a lifetime, Brüggemann works on a different axis. His engagement with these questions is a layered exploration that belies an archaeological sensibility in its emphasis on depth and its invitation to the viewer to dig down into the work. Brüggemann’s work requires that the viewer spend time unearthing and piecing together its fragments, while Kawara’s work plays with the fragmentation of time revealing the deeply arbitrary nature of the symbols and systems that we use to codify it.

Between these axes of contemplation and immediacy we can chart the hyper-consciousness of the modern self: caught in semiotic structures that fragment our experience and leave us to search among the pieces. 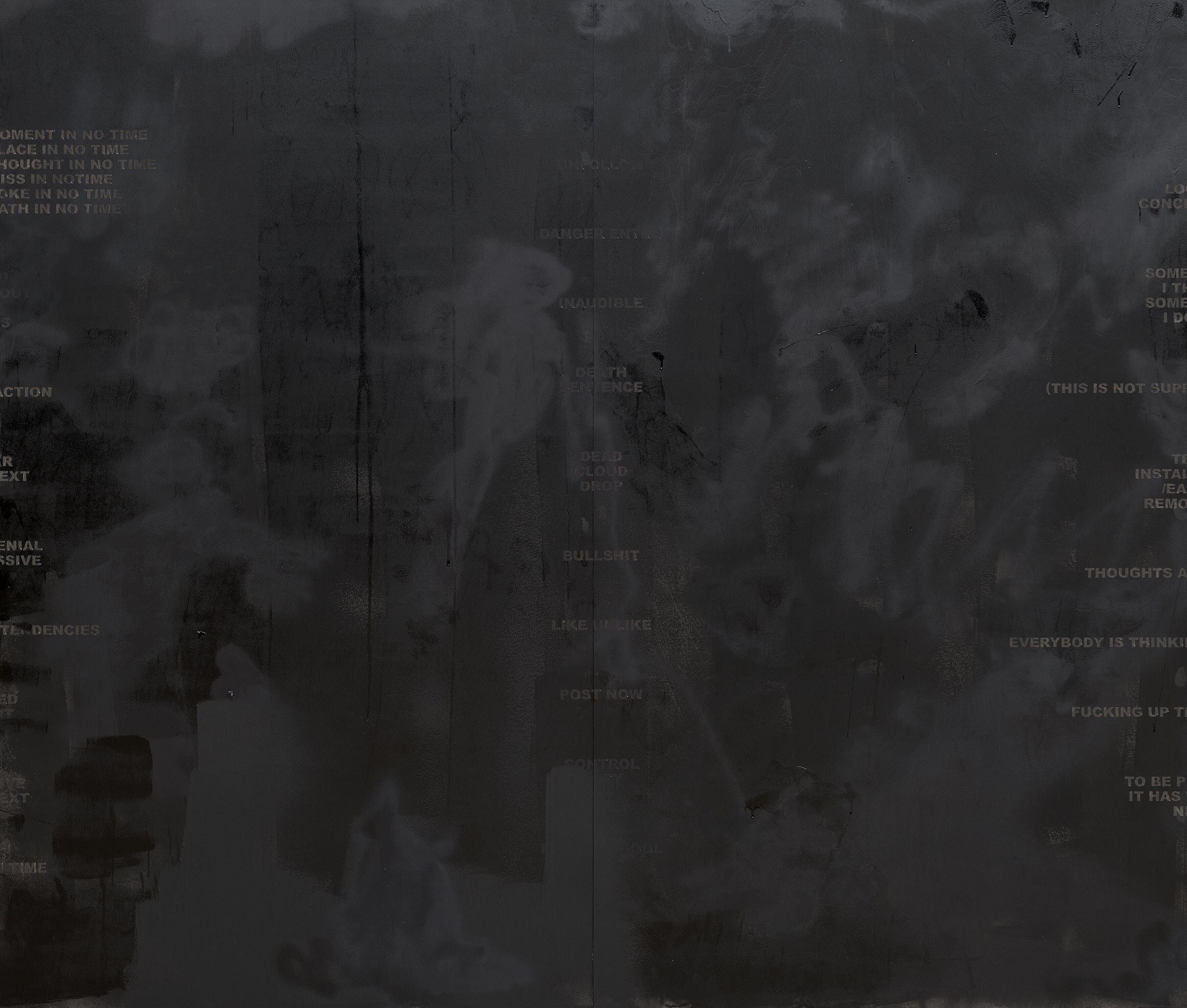 Stefan Brüggemann
Hyper-Palimpsest, 2019
acrylic and spray paint on wood
2 panels, each: 205 x 120 x 5.5 cm - 80 3/4 x 47 1/4 x 2 1/8 inches
Installed dimensions: 205 x 240 x 5.5 cm - 80 3/4 x 94 1/2 x 2 1/8 inches
Over the last 20 years, a dynamic generation of artists has developed in Mexico and Mexico City that have had an international impact. Departing from the idea of social sculpture, developed by Joseph Beuys as an artistic attempt to transform society, those non-traditional artists work within a new vocabulary using sculptural materials as well as video, photography, and performance to address historical and socio-political issues.

The Mexican artist Stefan BRÜGGEMANN works within this generation of artists, promoting a demystified and democratic idea of artmaking. Born in 1975 and working in a wide variety of disciplines between London and Mexico City, Brüggemann refers to 20-century art historical movements such as Conceptualism and Minimalism as well as aspects of popular culture, while addressing history, urban life, and current political issues. The artist’s installations combine social critique with a post pop aesthetic, creating refined artworks mantaining a punk attiude. 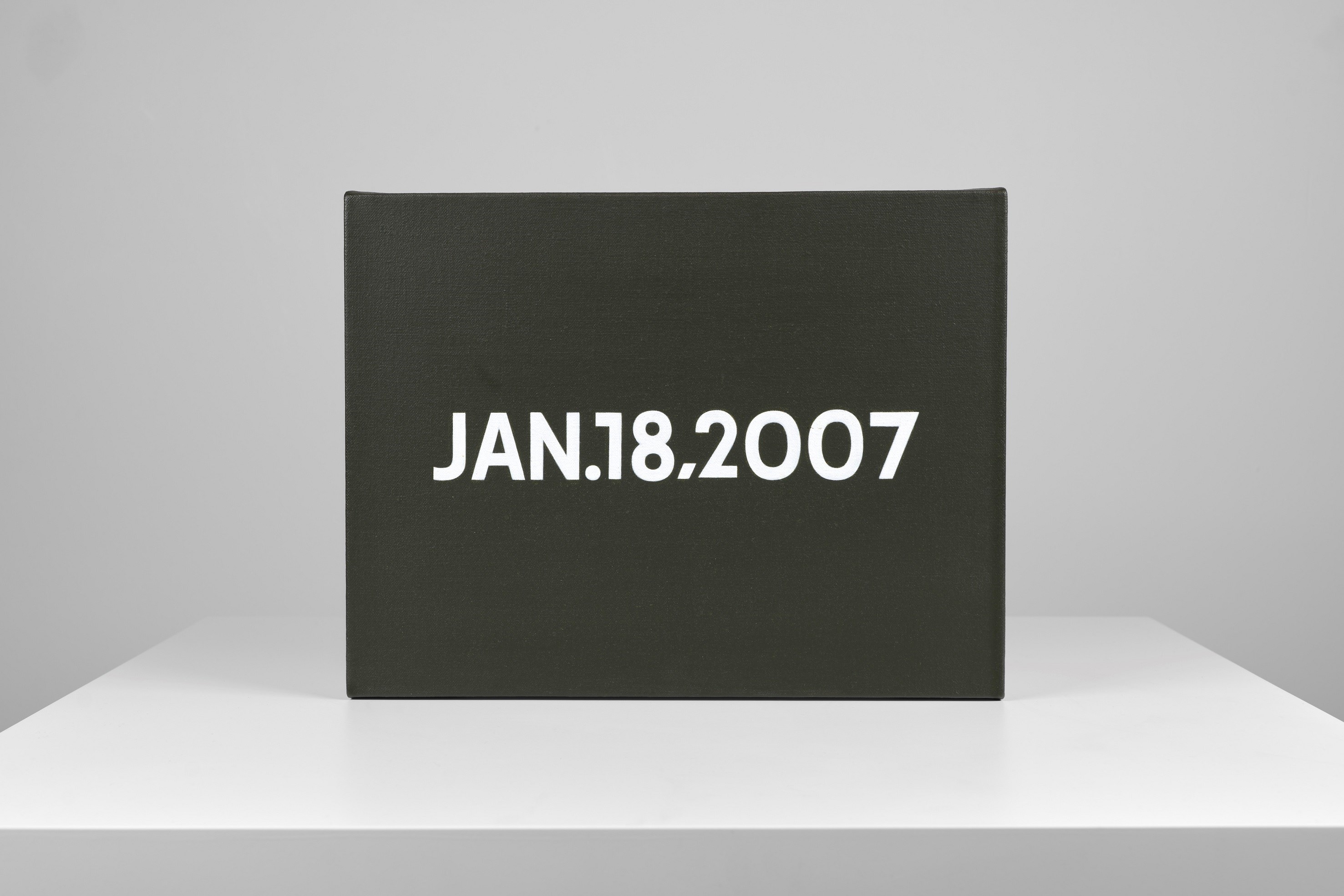 On Kawara
Jan. 18, 2007, 2007
on the reverse : On Kawara "Thursday" Jan. 18, 2007 "Today" Series n°3 2007
acrylic on canvas
20 x 26 cm - 7 7/8 x 10 1/4 in
On KAWARA (1932 – 2014) was a Japanese conceptual artist who lived in New York City from 1965. Kawara belonged to a broadly international generation of Conceptual artists that began to emerge in the mid-1960s, stripping art of personal emotion, reducing it to nearly pure information or idea and greatly playing down the art object. Along with Lawrence Weiner, Joseph Kosuth, Hanne Darboven and others, Kawara gave special prominence to language.

From January 4, 1966, Kawara made a long series of “Date paintings” (the Today series), which consist entirely of the date on which the painting was executed in simple white lettering set against a solid background of red, blue, gray, or black. The date is always documented in the language and grammatical conventions of the country in which the painting is executed. The paintings, executed in Liquitex on canvas, conform to one of eight standard sizes, all horizontal in orientation.

Kawara made almost 3,000 of these paintings in 112 different cities until his death in 2014. His body of work serves as an examination of the banality of existence and the passage of time.The exceptions are the three paintings, roughly five by seven feet, executed on July 16, 20 and 21, 1969 — three days when the world was riveted by the moon landing.