The HEART in ART 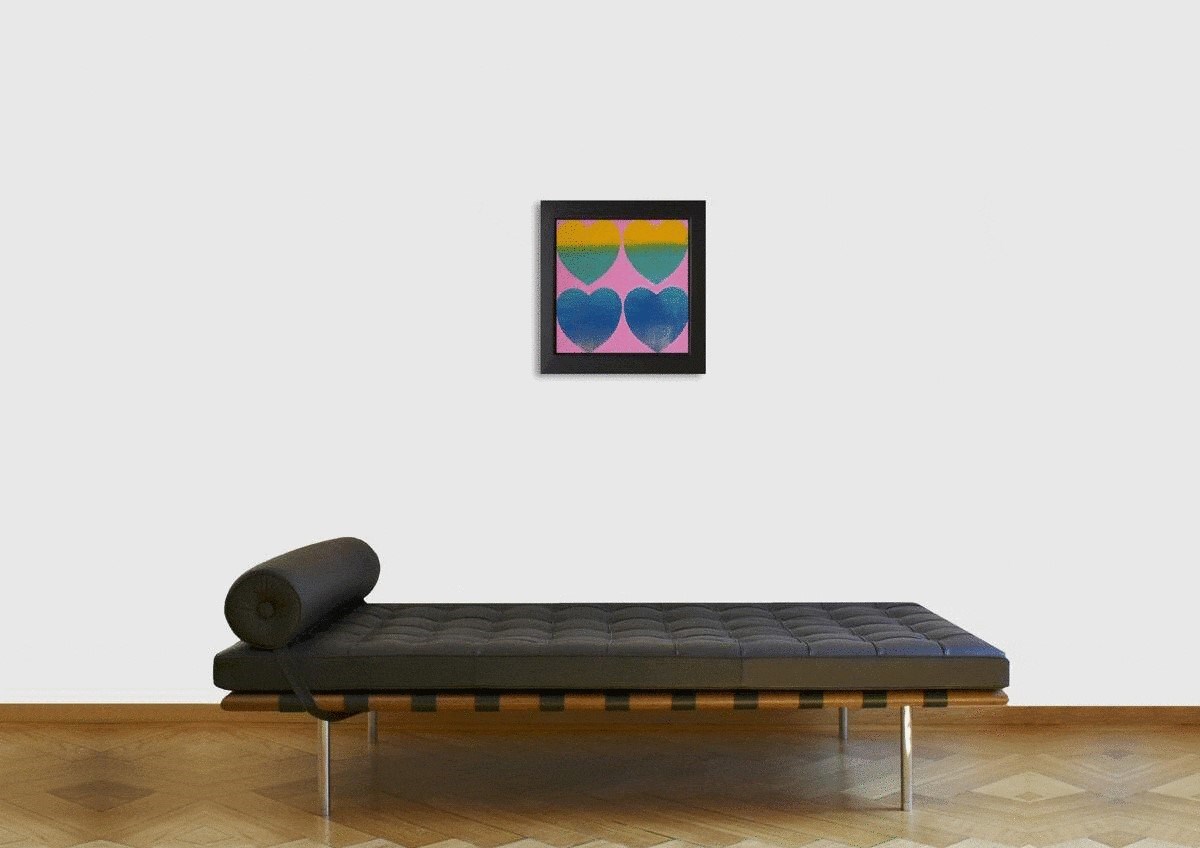 “People should fall in love with their eyes closed. Just close your eyes, don’t look.”
(Andy Warhol in: The Philosophy of Andy Warhol (From A to B and Back Again)
A short history of the heart
The heart: it is the centre of our being and its cultural meaning is instantly recognisable as emoticon, metaphor or symbol used for declaring affection, warnings on food and beverage packaging or as assistance to point out the nearest defibrillator. In a biological sense the heart refers to the hollow muscle of vertebrate animals that acts as a force pump maintaining the circulation of the blood. In a cultural sense, the heart as a metaphor generally refers to the centre of something emotional: heartless, heartfelt, thinking with your heart, my heart goes out to you, to eat one’s heart, heartbroken etc. Etymologically the word heart is derived from the old English ’heorte’ meaning breast, soul, spirit, will, desire, mind and intellect and originates from the Proto-Germanic ’hertan’ which stems from the Proto-Indo-European ’kerd’.

The view that heart is the centre of our beings has a long history that can be traced back to the ancient cultures. The Egyptians for example viewed the heart as the seat of intelligence, emotion and memory. This organic motor of the body was the only organ that was mummified and left inside the body. It was treated with extreme care during the embalming rituals as the weight of the heart ensured eternal life in the afterlife. The Greek physician Aristotle (384-322 BC) identified the heart as the most important organ as it was located in the centre of the body. Proclaiming it the seat of intelligence, motion and sensation and describing it as a 3-chambered organ. One of the most influential views on the heart that carried into the Middle Ages stems from the most well-known physician of the Roman Empire Aelius Galenus (129 AD-ca. 200/216). He asserted that the heart was shaped like a cone and that it functioned in the circulatory system.
In early Renaissance a revival of anatomy sparked a renewed interest in the heart whereby scientists and artists often mixed scientific and cultural ideas. This amalgamation of ideas becomes poignantly clear in Leonardo da Vinci's drawing of a heart (1490's) in which he drew a heart with two chambers that were divided by a septum. Although the artist had an extensive anatomical knowledge, he believed that in this one heart no two opposing emotions could co-exist, like for example regret and desire.

The origin of the shape of the heart that we know today is more difficult to establish. One theory is that the shape originates from the seedpod of the silphium plant, a giant fennel that grew near the ancient city of Cyrene along the north African coastline. Silphium was used as food flavouring, ingredient for cough sirup and functioned as an early form of contraceptive. The heart shape of this seedpod was also found on silver coins that circulated in Cyrene from 6-5 BC.

In the early 14th century, the heart starts to appear in Christian iconography as a metaphor for spiritual love, the love of God and piety. For example, the flaming heart which was an attribute of St. Augustine or the heart as a symbol for spirituality that was the attribute for St. Catherine (Sienna) and St. Anthony (Padua). In Giotto's The Allegory of Chastity (c.1320-25) love is depicted with clawed feet and hearts tied around him, Andrea Pisano's South Doors of the Florentine Baptistery (c. 1337) show Charitas with a heart and in Donatello's The Miser's Heart (1446-48) gold is found in the dead miser's heart (relating to the text Luke XII.34).

One of the earliest metaphorical visual depictions of romantic love in literature that is illustrated by the heart shape (or perhaps pear shape in this case) can be found in the mid 13th century Roman de la Poire by Thibaut. Depicted is a kneeling lover who gives his pinecone shaped heart to his object of affection. This illustration prompted in the next two centuries the rise to the heart shape as we know it today.

In 469 AD the ancient roman festival of Lupercalia (cleansing and fertility festival) was recast by Pope Gelasius I into the Christian festival St. Valentine, moving it subsequently to February 14. According to one embellishment Valentine, restored the sight of the blind daughter of his jailer and in another one Valentine performed illegal Christian marriages, an act that eventually cost him his head. The earliest mentioning of Valentine's day as a special day for lovers can be found in Chaucer's poem Parlement of Foules (1380-90). From the 16th century onwards, the heart becomes commonly associated with romantic love. Like Shakespeare making Romeo sigh in Romeo & Julia: „Did my heart love until now? “ or in Hamlet's longing words „Tomorrow is Valentine's day / All in the morning bedtime/ and I am mad at your window/, to be your Valentine.“ 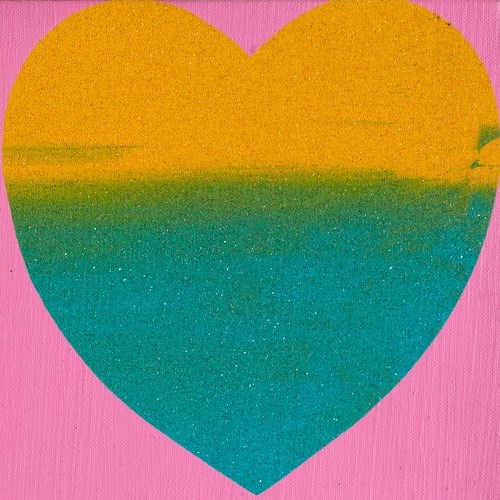 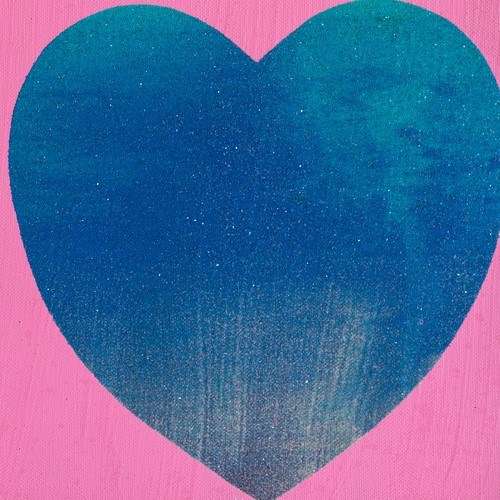 Detail 1                                                                                   Detail 2
“I love Los Angeles, and I love Hollywood. They’re beautiful. Everybody’s plastic, but I love plastic. I want to be plastic.”
(Andy Warhol, Holy Terror: Andy Warhol Close Up)
Watch the video here.
Andy Warhol - Hearts (Four), 1983
Andy Warhol's obsession with love and therefore hearts can be traced back to the early beginnings of his career. In the fifties the artist created a series of drawings of men using the blotted-line technique. All men have small balancing hearts on their fingers or placed next to their ears or hearts illustrating the artists interest in depicting young men. Later in his career Warhol's obsessive principles of repetition and serial creation resulted in a series of love themed canvasses depicting the human heart, a heart candy box, diamond dust hearts, physiological diagrams, instructions what to do in case somebody has a heart attack, pages of the phone book that list the people called heart and the valentine's heart ad. An homage to the manifold meanings of the heart so to speak.
Interestingly, the hearts series form a sharp juxtaposition to the artists depiction of the darker side of the American Dream, like the electric chairs, the revolvers and knives, car crashes, shadows and skulls. Although some illustrations of the heart do have a sharp edge like what to do when somebody has a heart attack, the subject does not lose its connection to the love theme. The manifold depictions of the heart illustrate a thorough investigation into the power of iconic symbols, seriality and images. Mimicking the persuasive strategies of an ad campaign that promotes the heart in all its qualities.

„Hearts (Four)“ was created in the year 1983 at the height of Warhol's commercial success. A time in which his superficiality and commerciality mirrored the eighties zeitgeist in an unprecedented way. Warhol's love for glitz and glamour reveals itself in the use of diamond dust, an exclusive material that the artist only applied on a few selected works, like the shoes, the portrait of Joseph Beuys, Shadows and the hearts giving them more depth and a touch of glamour. The tropical colour palette of the hearts is an allusion to the ads where they sell exotic vacations by showing sandy beaches, clear blue waters and a yellow setting sun. „Hearts (Four)“ originates from the estate of Tommy Pashun, the celebrity florist who rented and sold flowers and took care of the designer Halston's famous collection of orchids. Warhol and Pashun were both surrounded by a celebrity clientele, each fashionable and popular in their own artistic way. The artists shared a love for flowers and hearts as hearts are like flowers an everlasting symbol for romance and fertility. 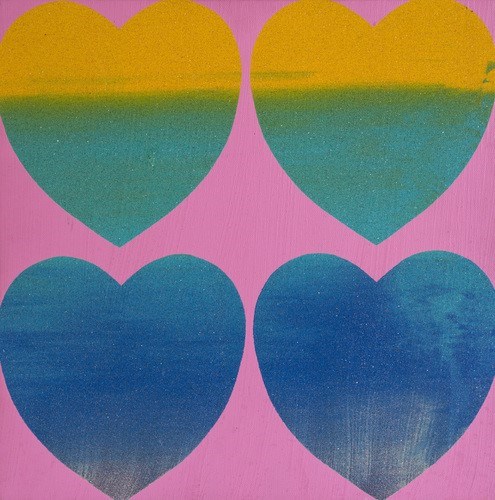