Whitford Fine Art are proud to present an exhibition of select ceramic works by one of the most innovative and versatile French artists of the 20th century: Jean Lurçat (1892-1966).

Although he is best known for his seminal work in the revival of the art of tapestry weaving during the 1930s, Lurçat's oeuvre encompasses not only tapestry, but painting, book illustration, lithography, jewellery and, most notably, ceramics. The latter would present for Lurçat another primary avenue through which to explore one of the most enduring themes of his work: the multitudinous forms of nature. 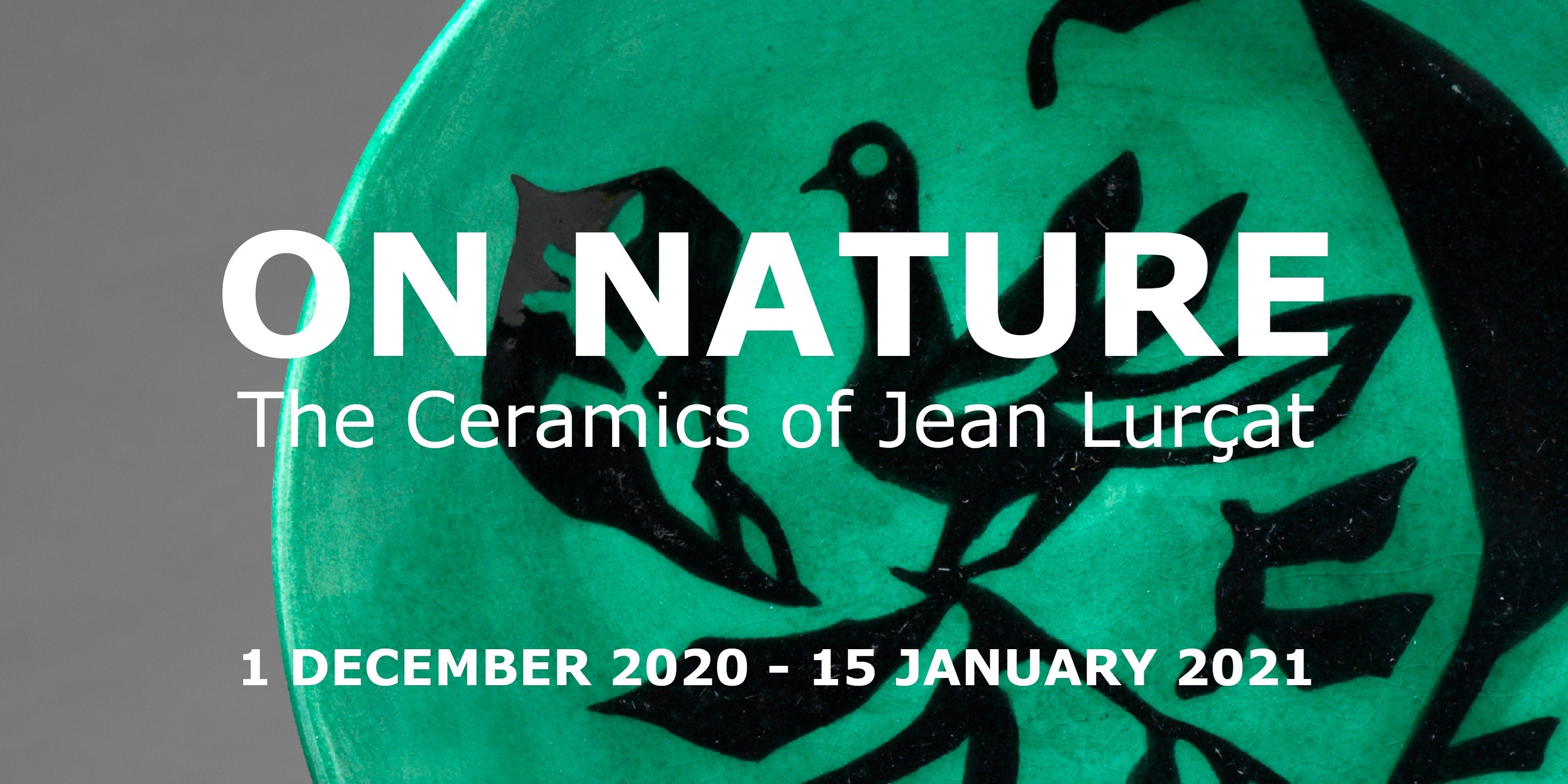 Like many artists of the period seeking to expand their repertoires beyond painting, such as Fernand Leger, Marc Chagall, Édouard Pignon and Pablo Picasso, Lurçat headed to the South of France to explore the art of ceramics. He settled on the workshop of Firmin Bauby, Mas Sant-Vicens, in Perpignan. Interestingly, Lurçat came to ceramics late in his career, only starting in 1951 after Bauby visited him at his home in Saint-Céré the year before to ask if he would be interested in working together. However, perhaps the true catalyst that spurred the accomplished École de Paris painter to try his hand at this new medium was the death of Étienne Bignou, his old friend and dealer, in February of the same year. This event seems to have prompted a period of intense creativity and production at Mas Sant-Vicens. Lurçat quickly became enamoured with ceramics and would visit the workshop at least twice a year, every year, until his death in 1966.

Throughout Lurçat’s tenure, the workshop produced various faience vessels for which Lurçat made master copies to be kept as models for numbered editions. His love of nature and all things rural is immediately evident in his designs: owls hoot at the moon through dark leaves at sunset; cockerels strut proudly across leaf-strewn courtyards; and numerous birds, suns and moons, perch or peep through leafy bowers. The execution of these designs in a limited palette of bright, contrasting primary colours paired with brilliant enamels, compliments and enhances the fluency of Lurçat’s style. 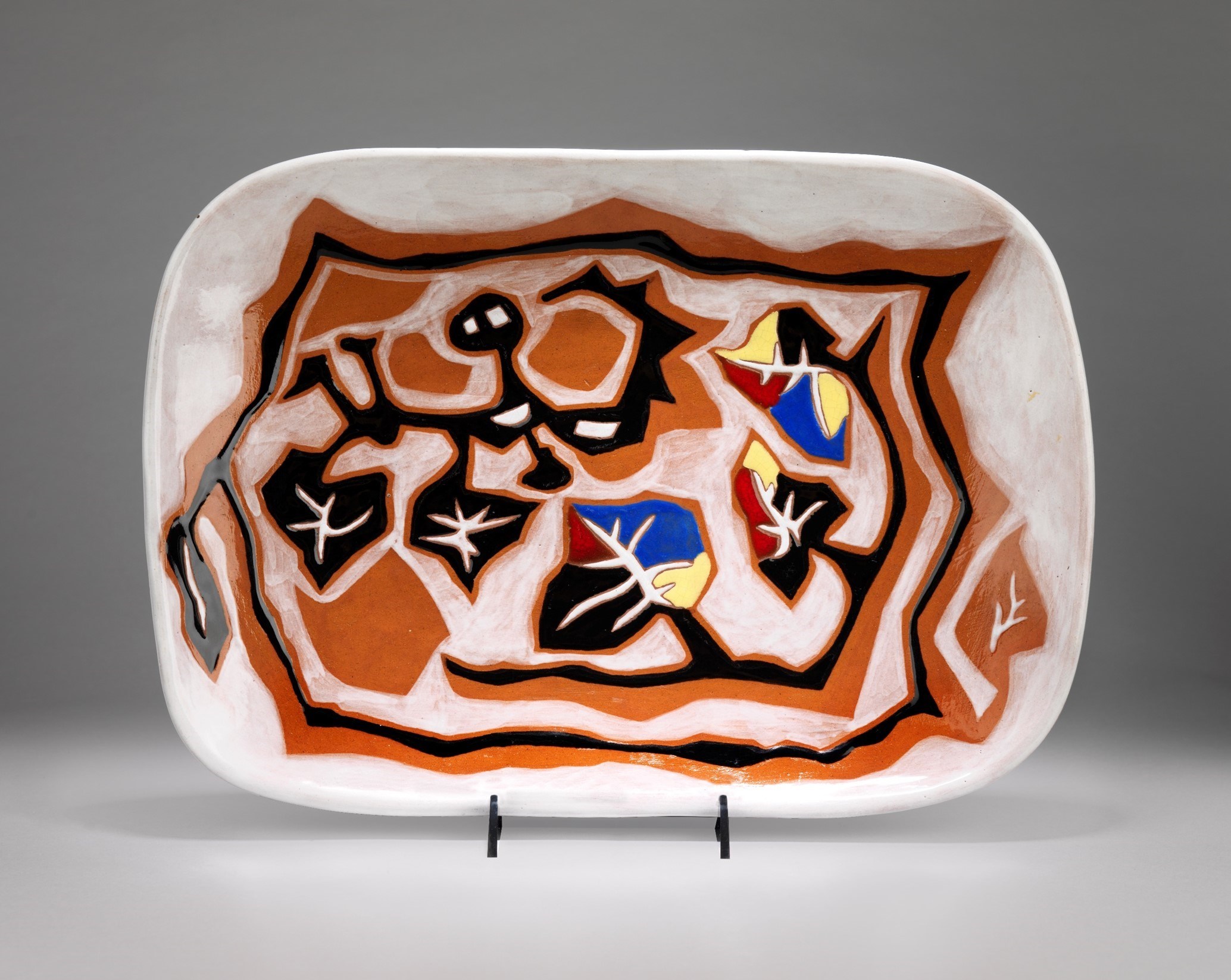 Tree Nymph, c.1955, glazed ceramic, 28 x 40cm, inscribed "Dessin J. Lurcat Sant Vicens, K.Z.I, 14/150" on verso, edition 14/150
Alongside the rural we find the mythical. Not content with simply representing flora, fauna and other physical manifestations of nature, Lurçat offers us nature personified in the form of minor deities: dryads, sprites and nymphs. These spirits of nature were probably inspired by several trips he made to Greece in the 1920s and again in 1965. They are at once human and not. Biomorphic forms peek through undulating foliage and dart through cresting waves, the suggestions of faces and limbs merging with their natural surroundings. There is a wonderful sense of movement to Lurçat’s designs, capturing the shifting, secretive and mischievous spirit of his subject matter.

Lurçat would reprise these semi-abstract motifs from nature continually throughout this fertile period of artistic output at the Mas Sant-Vicens workshop experimenting continually with different colour combinations. The ceramics specifically chosen for this online exhibition reflect his close and abiding interest in not only the physical forms and features of nature, but also its spiritual side. Through his chosen motifs, the vividness of the colours with which they are rendered, and the very tactile nature of medium itself, Lurçat employs ceramics to serve not only as a study of nature, but also as a celebration of man’s communion with its life-affirming diversity and beauty.