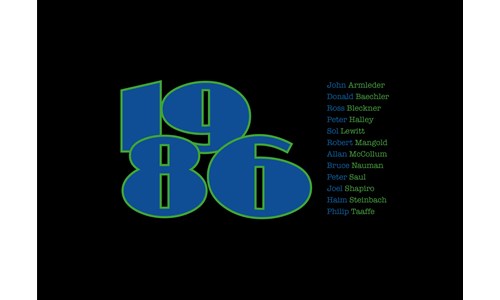 Maruani Mercier is pleased to present a group exhibition with a selection of eighteen artworks all executed in the same year, lending the presentation its title: '1986'.

In the history of the United States, the year 1986 is remarkable for its major developments in science, technology and mass culture, marking a period of breakthrough and upheaval. IBM unveiled the very first laptop computer, the protocol for what would later become e-mail was designed, Halley's Comet became the first to be observed in detail by spacecraft and the Human Genome Project launched. At the same time, there emerged a growing distrust in these forms of progress and the governments who championed them, triggered by events such as the Space Shuttle Challenger explosion, the Chernobyl nuclear disaster, and the escalating AIDS crisis. This occurred in the midst of the ‘yuppie decade’, in which American wealth and consumerism reached new heights, and the wildly popular Oprah Winfrey show became emblematic of an increased obsession with celebrity and a merging of the public and private realms.

Made in 1986, the works in this exhibition were also created at the threshold of a new era in the art world, which was set to become increasingly global and high-powered. Biennales and international art fairs emerged across all continents, challenging the dominance of Europe and the United States. While the artists included here responded to national and global developments, they were mostly embedded in the preeminent New York scene. Five of them first showed together as part of the ‘neo-geometric conceptualist movement’ that emerged in the early 1980s, with the East Village at its center. Including Peter Halley, Ross Bleckner, Haim Steinbach, Philip Taaffe and Allan McCollum, this group of artists directly responded to what Peter Halley called the ‘geometricisation of modern life’, a world increasingly organised through mechanisation and commercialisation.

Peter Halley was simultaneously fascinated and disturbed by the acceleration of technology and science in the years leading up to 1986. It was in this year however, in which he stated that “the optimism and excitement of my work definitely reflected the dynamism I felt about being involved in the [East Village] scene”, and thus his geometric vocabulary became more lively and pop. In Two Cells with Conduit, two large black cells are connected by a black conduit against a bright orange background. The composition could allude to a map, a grid or a technical drawing -- but it is clear that the two ‘cells’ are interconnected and dependent on one another. Halley’s aim was to lay bare the structures of contemporary society defined by both isolation and connectivity, acutely foreshadowing our increased reliance on technology in the decades to come.

Ross Bleckner’s Departure forms part of his series of stripe paintings from the 1980s, with which he commemorated the deaths caused by the ravaging AIDS crisis. Bleckner saw AIDS as a reason to be critical of scientific progress, characterising it as “totally unstoppable, totally out of control and completely environmental”. In Departure, Bleckner alternates the strict geometrical composition of black stripes with blood coloured stains that elicit optical effects in the painting, while a frame of colourful flowers runs along the edge of the work as an ornamental border. Departure demonstrates the artist’s complex relationship towards abstraction, insisting that art and the body are inextricable from one another. While the painting reflects the national sense of loss prevailing throughout 1986, it also acts as a touching memorial and a celebration of life.

Perfect Vehicles (five vessels) by Allan McCollum encapsulates the neo-conceptual ethos of art-making where mass-production was celebrated and the everyday object was given iconic status. This was an era in which packaging could be art, and Madonna sang ‘we are living in a material world’. McCollum was fascinated by the relationship between objects and desires. In this work, five jars cast out of plaster in identical shapes and enamelled in orange and red tones, are set next to each other on a plinth. Having no opening, the expected use of the object is eliminated; as the title suggests, they instead become vehicles for the viewer’s projections of value and meaning. McCollum describes this body of work as “a language for describing the emotionality that runs through mass production, whether it’s desires to save the world by inventing a cure for AIDS, or desires to make a few million dollars in the process”. Haim Steinbach uses similar strategies in his Together Naturally series, where seductive high-end design objects are placed on slick triangular shelves. Both Steinbach and McCollum use the formal devices of doubling and repetition, viewing “large quantities as connected to hoping and wishing” (McCollum) and as a conduit for our hopes and dreams.

Donald Baechler has long explored how common, recognisable objects can act as carriers of nostalgia and memory. Employing naive imagery such as beach balls, flowers in a vase, a rocking horse (as in Hours and Jewels) or a rocket-like spacecraft (as in Abstract Painting with Spaceship), his layered compositions are like fading dreams from a long gone adolescence. Art critic Holland Cotter has commented on “how thoroughly images of childhood have pervaded art of the late 1980's and early 90's”, perhaps owing to a longing for a simpler time in the wake of irreversible technological progress. In later years, Baechler would style himself after Warhol, adopting factory-like working methods by projecting his iconic drawings onto canvases and having his assistants paint them in series.

Andy Warhol’s portrait of prominent art dealer Jacob Weintraub is among the last works of his career before his death in 1987. Not unlike Warhol himself, who came from humble beginnings and became a star, Weintraub was a man who survived the Warsaw ghetto and then rose to prominence and wealth in New York City. With his obsession for mass media and the interview format, Warhol encapsulates the zeitgeist of 1986, which saw the launch of the Oprah Winfrey show and the start of a development the Wall Street Journal coined as ‘Oprahfication’. It became normal for Americans to publicly confess and discuss intimate details of their lives on television, receiving their ‘fifteen minutes of fame’ -- and vice versa, celebrities would be expected to be just as candid with the public. Warhol’s portraits have an ambivalent relationship to celebrity culture, as they position it as something that money can buy, and that an artist can generate.

In 1986, Bruce Nauman had just ended his hiatus of nearly two decades where he focused on time-based media, and resumed his work with cast objects. For Nauman, the process of making a work is more important than the finished product, as he interrogates the role of the artist as a communicator and manipulator of visual symbols and language. Untitled (Crossbeams) offers a fragile balance between two elements, with two cast iron beams forming a cross, almost hovering off of the floor. As with his other sculptures, they likely act as stand-ins for absent bodies, separated or even injured, as the artist was interested in power dynamics and political struggle. Using the simple form of an iron beam, Nauman expertly plays with space and the frustrations and passions it can evoke.

Robert Mangold’s Red Ellipse/Red Frame and Sol LeWitt’s Double Asymmetrical Pyramids also present us with binary structures, which in this case explore the infinite possibilities of line and colour. In Red Ellipse/Red Frame, two shaped canvases are joined along their inner edge. Every element of this work is created in careful opposition, with its shapes and bold colours influenced by the nascent digital spaces of the mid 1980s. As with Sol LeWitt’s pyramid drawing, asymmetry does not lead to a clash, but rather to harmony and balance. Double Asymmetrical Pyramids is a gouache corresponding to the artist’s large-scale Pyramid wall drawings. Brightly coloured triangular planes form two pyramid shapes, set playfully against an ochre background. Famously carried out by others, LeWitt opened up his work to collaboration and emphasised the process over the product, becoming a pioneer of conceptual art. In a sense, his drawings are the more ‘original’ artworks: “Only I can do the gouaches”, LeWitt has said.

For many critics and art historians, 1986 marks a turning point, ushering in a globally connected contemporary art world enabled by new communication and financial technologies. The art market experienced growth at exponential levels, with auctions and galleries setting records for contemporary art, and artworks became an internationally traded commodity. As the artists in this exhibition perhaps anticipated, the difference between an artist and the art they were creating was collapsing: “works of art are treated like subjects and artists design themselves like objects”, Isabelle Graw writes of this period. The legacy of the year 1986, and of the artists in this exhibition, is the continuous interrogation of that relationship, keeping its intriguing complexities intact. Many of their concerns continue to resonate today, as they explored what art could be in a year of immense economical, political and technological change.