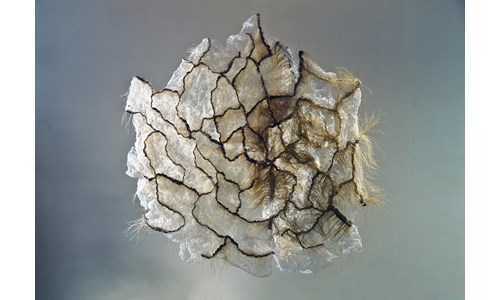 The Lin Deletaille Gallery and the Eleven Steens art center will dedicate a double exhibition to the Belgian artist Carole Solvay whose work has recently been the subject of a monograph published at the Fonds Mercator with Yale University Press.

For more than 25 years, equipped with feathers and thread, Carole Solvay has created sculptures of ethereal beauty that seem to defy gravity. The feather is the central core of her research, its common denominator. She explores this organic material in a thousand ways; she experiences its resistance, its fluidity. Carole Solvay instills her mark on the living, gives it a new plastic. Piece by piece, she weaves her own formal mythology. She tries to decode the mystery of the raw material, its very essence. Carole Solvay rewrites the universe and dissolves its boundaries, blurring the spectator's bearings. The Fonds Mercator, in collaboration with Yale University Press recently devoted a monograph to her work – Carole Solvay: To Move Without Noise. In the spring of 2021, the artist will be honored by a retrospective at the Fondazione Ghisla Art Collection in Locarno, Switzerland.

From September 3 to October 18, the Deletaille Gallery will hold a solo show entitled Metaphor of the Soul. About twenty works will be exhibited, from Solvay’s first works to her most recent. The exhibition will highlight pieces of various dimensions, intimate objects that, through their play of matter, invite the viewer to a physical and intellectual exploration of her work and what emerges from it. Since ancient times, in many cultures, the bird has symbolized the human soul. As such, it punctuates the stories, legends and beliefs of Western and Near East literary traditions. Messengers, omens, by their very presence the birds are predictors of events to come. Carole Solvay says herself she never consciously decided to work with feathers. But sometimes, when the mind seems to wander at random, the subconscious interferes and deploys its own stories, even more fascinating.