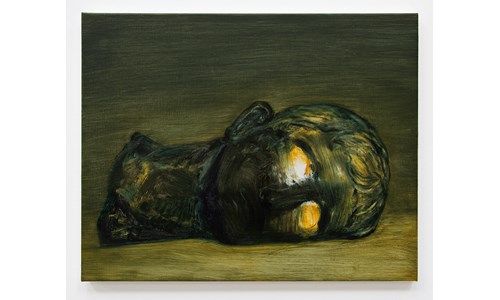 Much without many is an exhibition that says a lot without showing a lot. It consists of seven voices from the Netherlands, France, Peru,
Mexico and China which, taken together, question the period that we are living through at present. With few reference points to guide
us, and virtually no opportunity to get things in perspective, surely it would be useful to turn to artists to enlighten us?
The idea was not to attempt to be exhaustive or address the crises in public health, the economy and employment or the political
handling of the issues head-on, but rather to understand that we are in a period of profound change and that the works taken
together can stimulate a process of reflection with a polyphonic coherence.
The Covid-19 pandemic has plunged the world into chaos, combining suffering and bereavement, but can also be perceived as an
invitation to think up new ways of living together. The virus reminds us about the importance of living as mortals, and re-thinking our
relationship to the economy, as well as encouraging us to take account of the many interdependencies between humans and nonhumans.

In the right-hand room, we see works tackling the gravity of this crisis. With deaths, of course, as well as the concepts of
lockdown, social distancing and invisible walls (health cordons, customs, identity) put up between us all. Jorge Méndez Blake
provides several works describing the concept of separation (Dividing Walls Project, Two Walls, Balcony) while Chaim van Luit exploits
a play on words between STAR and STARVE. Nicolás Lamas brings us an apocalyptic vision with our world reduced to dust (World
Atlas) and, by tearing the pages from an old copy of National Geographic, brings together front-line medical staff and an allusion to
space travel (cf launch of the first SpaceX manned mission in May). Several works refer to the press, to the ambiguity of statistics and
distortions in media coverage which have led to a degree of hysteria. It is hard to know who to believe among specialists who have all
sorts of opinions, which is unhelpful to a bewildered general public. The work Image du futur actuel (Image of today’s future) by Benoît
Maire sums up rather well the schizophrenic situation in which we find ourselves.

The crisis is harsh and we cannot even map out its full extent yet. What is certain is that the way we live is being challenged. Homo
oeconomicus has been shaken by the worldwide instant shutdown of many business activities that were thought to be unstoppable.
The fact that the world has slowed down and suspended its frenzied pursuit of consumption has shown that it could be done. So the
capability of changing fast, substantially and worldwide really does exist. Of course, it will leave deep, lasting scars, but nevertheless
it is feasible. The progress that modernity required us to believe in is no longer on the horizon. The questions raised for years by
intellectuals and scientists working on the disruption caused by climate change and on the consequences of depleting resources, have
led to conceptual frameworks that are now being seen in a new light. An increasing number of lines of action are becoming apparent,
in order to achieve a sustainable economic anthropology.

But as we can see in the left-hand room, the actions of Man are visible everywhere (Wouter Venema), the jaws of industry are
crushing nature or disrupting its equilibrium (Lamas) and the living world is constantly being manipulated (Théo Massoulier).
How can new connections be created with the living world without accelerating its disappearance, its erasure (Lamas)? How to
rebuild a world with the existing elements (Venema)? We absolutely must remember what has happened to us, and deal with the
complexity of the phenomena, to discover new ways of producing, consuming, financing and doing business.
That involves risk-taking, wanderings and social unrest in the future. But the future is precarious, and Man seems to be bound to learn
to live in a world of uncertainties, to acquiesce to a world that has become problematic, where no authority any longer has the power
to arbitrate, but where we need to learn to make sense of it together.
Build from what we have been given. Build by assembling disparate elements to create a world. The ingenuity of that composition is
crucial.

Anthropic Combinations of Entropic Elements/2020/5G, the elegant collections assembled by Théo Massoulier combine heterogeneous
elements (minerals, plants, electronics) and immerse us in a futurist world. The hybrid is a key concept in our contemporary world.
These collections give the appearance of emanating from bio-engineering labs, they are clearly-defined, surgical yet depict chimeras.
Disturbing yet amusing, Massoulier’s manipulations embody certain issues for tomorrow’s world.

Many researchers have concluded the absence of a common world that can be shared, or even the difficulty of coming up with a
common description of the world. While becoming aware of our mutual vulnerability, it will be necessary to find out which land is
habitable, and who we are going to share it with (Bruno Latour, Où atterrir ? (Where to land?).
Surely we need visionaries to guide us? Those whose burning gaze helps to see in the darkness (Xie Lei). The works exhibited in
the rear room each cast a light in their own way. Chaim van Luit reveals an imaginary Milky Way consisting of Roman coins
found in the soil and placed on photosensitive fabric. Xie Lei shows us a man on fire and Benoît Maire uses childhood and
geometry to recompose a world. His Château creates a discussion between geological time (ammonite) and human time (camera
lens) while Nicolás Lamas squeezes The Light of the Past between two blocks of marble to create a monolith with a mysterious
power. Wouter Venema’s Burning Oleander combines glass blown into the form of a flame with a paper branch of the deadly
poisonous oleander plant. Finally, in an optimistic gesture, a flowering fruit and phallus tree by Xie Lei really comes into its own as
a symbol of fertility and prosperity. This painting could be a fine illustration of Man’s need for connection to be efficient. We live in
interdependence, we are social beings, we need to see each other, touch, talk.

We have unlearned how to experience the wonderment of being alive. We have debased, humiliated and devalued our environment. A
change is possible, but requires a collective commitment. Jorge Méndez Blake is showing a neon sign in the Wunderkammer
entitled SANS REVOLTE (WITHOUT REBELLION), the last two words written by Albert Camus in a novel unfinished when he met
his accidental death. It can be read in all its ambiguity (should one live without rebelling, or will nothing change without rebelling?)
Although the smallest individual action is important, it is the union of wills that will enable an inward-looking system to be changed.
Nevertheless, any individual act has power, as Méndez Blake points out with his interpretation of Bartleby the Scrivener, repeating
relentlessly «I would prefer not to» thus paralysing a well-oiled administrative system. A wonderful political gesture that appears
insignificant. It is no coincidence that the Occupy Wall Street movement picked this character dreamed up by Herman Melville in 1853
to symbolise the rejection of an economic situation that was unbearable for many. Saying that the virus is spread from one individual
to another and ultimately goes on to have a worldwide impact is a fine image for understanding how an idea can spread from one
person to another, like a virus, and ultimately have a genuine impact. Small, almost imperceptible movements may, with perseverance,
stir our consciousness to reveal that something is important. Perhaps the journey will be long, but if joy is the fuel, it will be renewable.
Artists, we need stories and myths.
3 September -24 October 2020