Crossroads. Travelling through the Middle Ages 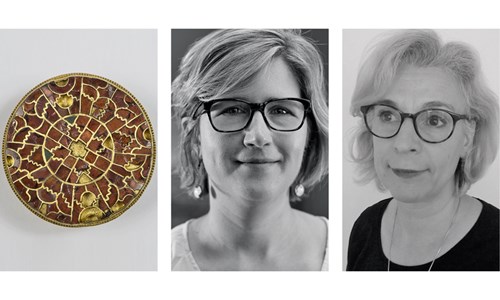 By Britt Claes & Alexandra Van Puyvelde, Curators of the exhibition of the same name at the Art & History Museum (27/09/2019 → 29/03/2020). Britt Claes is Conservator a.i. of the Medieval Archaeological Collections and Alexandra Van Puyvelde is Scientific Collaborator in the Art of the Islamic World & Art of Eastern Christianity Collections at the Art & History Museum

The exhibition Crossroads. A journey through the Middle Ages, currently held at the Art & History Museum, focuses on the Early Middle Ages (300-1000) in Europe and the Eastern Mediterranean, a period of great change. From the 3rd century and particularly after the fall of the Western Roman Empire (476), Europe faced a huge migration of people from the East, which we know about primarily through the discovery of grave goods. Thanks to the durability of the Roman road network and the reach of river routes, movement was comparatively easy throughout Europe and Asia. Conflicts, trade, diplomacy and marriages created diverse forms of contact and exchange in terms of culture, knowledge, ideas and religious practices. The Eastern Roman Empire held until 1453. Greco-Roman heritage survives, and continues to inspire both the East and the West today.