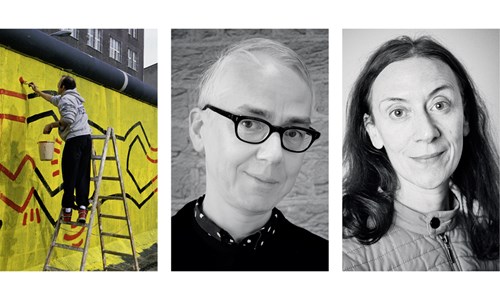 On the occasion of an extensive retrospective organised by Tate Liverpool and presented by BOZAR, Darren Pih and Alberta Sessa will discuss the work of the iconic American artist and activist Keith Haring (1958-1990). The artist emerged as part of the vibrant New York art scene of the 1980s. He produced a large body of work: large-scale drawings and paintings, videos, collages, posters, painted objects and murals. He was actively engaged in various battles that targeted drugs, HIV/AIDS, apartheid and the nuclear arms race. Keith Haring believed that art truly should be for everyone. For him, the city streets and subways in New York City were legitimate spaces for showing art. In October 1986, Haring was invited to paint the west side of the Berlin Wall by a group monitoring human rights violations in East Germany. The result is a work depicting an interconnected chain of his signature figures in the colours of the German flag. An overt political statement, the mural is an ‘attempt to psychologically destroy the wall by painting it.’